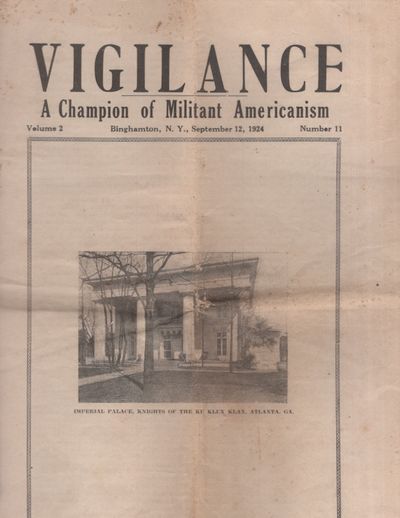 by [Klan]
Binghampton, New York: Vigilance Publishing Company, 1924. First Edition. Periodical. Good. Periodical newspaper. Single issue. Volume 2, number 11. 8 pages. Illustrations. Newspaper has been folded twice and there is a small pinhole in the center of the folds penetrating to page 3. The front cover has a photograph of "the "Imperial Palace Knights of the Ku Klux Klan, Atlanta, GA." Articles titles include "Klan Not in Politics", "Press Aids Criminals", "Klans Meet Near Homestead of Mark Twain", "Our Tottering Institutions", "The Nation's Greatest Inspiration - American Women by a Klanswoman", and several local articles. Some advertisements. Scarce. New York Historical Society has one issue. (Inventory #: 22669)
$200.00 add to cart or Buy Direct from Americana Books
Share this item