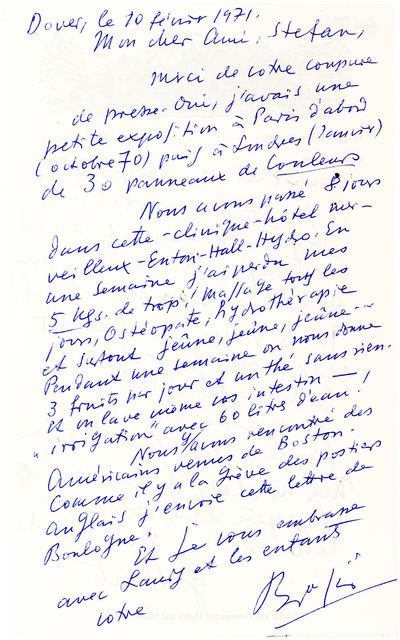 by BRASSAÏ
BRASSAÏ. (1899-1984). Hungarian-French photographer best known for his photographs of Parisian nightlife. ALS. ("Brassaï"). 1p. 8vo. Dover, February 10, 1971. To Hungarian-American filmmaker, photojournalist and author STEFAN LORANT (1901-1997). In French with translation.
"Thanks for your newspaper cutting. Yes, I had a little exhibition in Paris first (October '70), next in London (January) of 30 panels of color. We have stayed 8 days in this clinic in old Enton Hall Hydro. Massage every day, osteopath, hydrotherapy and always fasting, fasting, fasting… During one week we were given 3 fruits per day and a tea without anything. And an enema – 'irrigation' with 60 liters of water! We met Americans there who are from Boston. As postmen are on strike at Glais, I send this letter to Boulogne. Kisses for you and Lauy and the children. Yours…"
Born Gyula Halász in the Hungarian city of Brassó, Brassaï first visited Paris at the age of three while his father taught at the Sorbonne. He returned to the City of Light in 1924, joining a number of Hungarian expatriates and taking a job as a journalist. He supplemented his writing with photographs of the city and it was in that medium that he made his mark. Adopting the pseudonym Brassaï, his 1933 collection of photographs, Paris de nuit, was pioneering in its technique as well as for thevarietyof scenes it depicted. Inspired by Toulouse-Lautrec, Brassaï captured the people of Paris, from the Left Bank's brothels and gangs to the city's cultural institutions and elite society.
Our letter refers to Brassaï's exhibition "Trente panneaux couleur" at Paris' Galerie Rencontre which was held from October 7 to November 7, 1970.
Enton Hall was an estate built in 1880 and, later, converted into a health spa. Its most famous client was Ian Fleming who, after his 1956 stay, included James Bond's visit to a fictionalized version of the spa called "Shrublands" in his thriller Thunderball.

Born in Hungary, Lorant made a career as a filmmaker in Austria and Germany before being jailed in 1933 for his opposition to Hitler. Upon his release, he immigrated to the United States where, over the course of 40 years, he authored and edited numerous photography books including Lincoln: A Picture Story of His Life, The Glorious Burden, about United States Presidentsand Sieg Heil!, a history of Germany. Lorant had many prominent friends including John and Jacqueline Kennedy, Marilyn Monroe and Marlene Dietrich. He was an advisor to Life
magazine founder Henry Luce, and an early supporter of Winston Churchill.
Accompanied by a 1991 letter written by Brassaï's wife, Gilberte Boyer, as well as a fragment in her hand about Stefan written on the verso of Brassaï's letter on illustrated Enton Hall Hydro stationery.
In fine condition and uncommon. (Inventory #: 20356)
$425.00 add to cart Available from
Lion Heart Autographs
Share this item