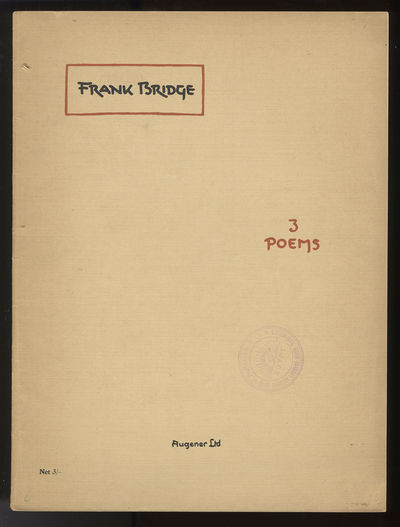 Frank Bridge was an "English composer, violist and conductor. He studied the violin and composition at the RCM, where a scholarship won in 1899 enabled him to work under Stanford for four years. He quickly made a professional reputation as an outstanding conductor and chamber music player....He was also a remarkable teacher, though Britten was his only composition pupil.

"The isolation of English musical life from far-reaching developments abroad was an obstacle to the recognition of Bridge's later works. After his death his music fell into almost complete neglect, though interest was subsequently revived. The poetic insight and consummate technique of his work promise it a permanent place in the repertory." Anthony Payne, Paul Hindmarsh, and Lewis Foreman in Grove Music Online. (Inventory #: 34103)
$28.00 add to cart or Buy Direct from
J. & J. Lubrano Music Antiquarians
Share this item