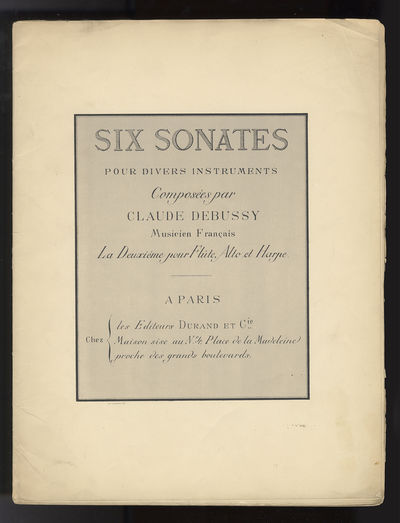 Occasional performance markings in pencil throughout.

The present sonata premiered in Paris on 10 December 1916 at Chez Durand.

"One of the most important musicians of his time, [Debussy's] harmonic innovations had a profound influence on generations of composers. He made a decisive move away from Wagnerism in his only complete opera Pelléas et Mélisande, and in his works for piano and for orchestra he created new genres and revealed a range of timbre and colour which indicated a highly original musical aesthetic.

"At first the war depressed Debussy into a state of creative sterility from which he produced only the Berceuse héroïque for piano (later orchestrated), commissioned by the Daily Telegraph for King Albert's Book. The summer of 1915, spent in a villa on the channel coast at Pourville, was a productive one: in quick succession he composed the Cello Sonata, En blanc et noir, the Etudes, and the Sonata for flute, viola and harp, but at the end of the year he underwent a debilitating colostomy (for rectal cancer) ... His last concert appearance was to play the Violin Sonata with Gaston Poulet at St Jean-de-Luz in September 1917." François Lesure and Roy Howat in Grove Music Online. (Inventory #: 33661)
$94.00 add to cart or Buy Direct from
J. & J. Lubrano Music Antiquarians
Share this item