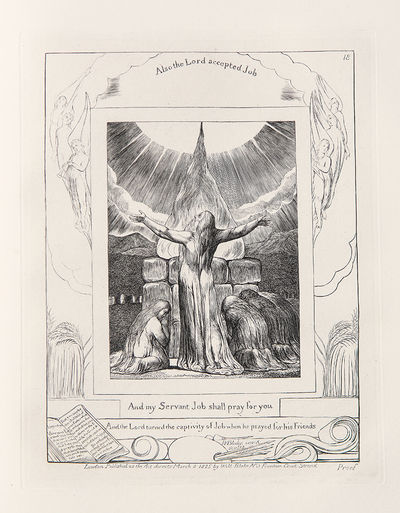 by BLAKE, William (1757-1827)
London: William Blake, 1826. Folio. (17 x 13 inches). Engraved pictorial title and 21 engraved plates by Blake, each being mounted India paper proofs, each plate marked "Proof" in the lower right corner, on paper watermarked J. Whatman Turkey Mill 1825. 2-page manuscript note headed "The fullness of Jesus" tipped onto front free endpaper. Early grey paper boards with the original paper lettering piece on the upper cover. Housed in a green cloth box. Blake's renowned engravings for the Book of Job: one of 150 proof sets on India Paper. "The story which Blake called 'Job's Captivity' fascinated him all his life. He alluded to it throughout his drawings and writings, made a large separate print of Job in 1793, and then a series of twenty-one designs (now in the Morgan) for his faithful patron, Thomas Butts, about 1810" (Bentley). Blake had completed the designs for what would become his Illustrations for the Book of Job around 1805-1806 for Thomas Butts, a clerk to the commissary general of musters who had by then become Blake's major patron. The publication was not conceived of until ten years later, when Linnell, hoping to provide his ageing friend with a much needed income, offered to finance the engraving and printing. The plates were borrowed back from Butts in 1821, and Blake began the arduous task of the engraving. Although the title page is dated 1825, publication was delayed until 1826, and the date amended on a label pasted to the boards in which the plates were issued. This striking work was printed in four different series during the 19th century: a first set of 150 "proof" copies on india paper, 1826 (to which series the present set belongs); a second set of 65 "proof" copies on French paper, 1826; 100 sets on drawing paper, with the word "Proof" removed from the plates, 1826; and finally, 100 sets on india, mounted on heavy paper, 1874, pulled from the original plates by Linnell. The India paper proof sets, like the present, are the best printing of these famous plates, being richly inked strong impressions. Damon describes the illustrations as "Blake's most lucid; and they are the supreme example of his reading the Bible in its spiritual sense." Ray adds that they are "supreme masterpieces of graphic art." Ray, Illustrator and the Book in England 8; Damon, p. 217; Bindman 625-646; Keynes 55; Binyon 105-126; Bentley 421A. (Inventory #: 38885)
$75,000.00 add to cart or Buy Direct from
Donald A. Heald Rare Books
Share this item
Donald A. Heald Rare Books
Offered by

Heaven the Best Country: Being Some of the Last Meditations and Discourses of that Faithful Servant of Jesus Christ

Philadelphia : Edward C. Biddle , 1715
(click for more details about Heaven the Best Country: Being Some of the Last Meditations and Discourses of that Faithful Servant of Jesus Christ)

The Bermuda Islands: A Contribution to the Physical History and Zoology of the Somers Archipelago. With an Examination of the Structure of Coral Reefs

Philadelphia : Published by the author , 1889
(click for more details about The Bermuda Islands: A Contribution to the Physical History and Zoology of the Somers Archipelago. With an Examination of the Structure of Coral Reefs)
View all from this seller>