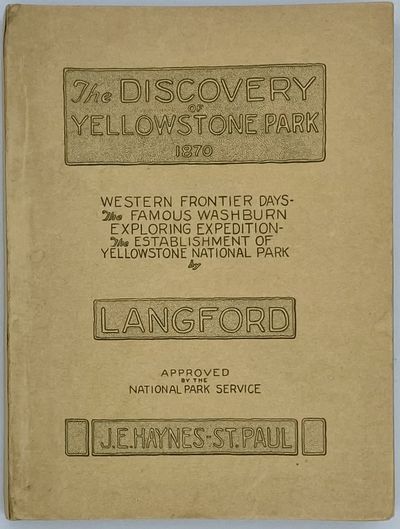 by Langford, Nathaniel Pitt
Saint Paul: J.E. Haynes Publisher, 1923. Second Edition. 188pp. Sextodecimo [17 cm] Original tan printed wrappers. Backstrip has been discreetly repaired. Better than very good. Contemporary inscription on front endsheet. Illustrated throughout with black and white views. Langford's own personal narrative, the earliest to appear (preceding Hayden by a few years) of the first successful expedition. These articles helped with the creation of Yellowstone National Park and likely were the reason that Langford was placed as director.

"In 1870 the Washburn party, escorted by a small contingent of U.S. Cavalry, ventured into the untrailed wilderness and mountain fastness now known as Yellowstone National Park, Adventures and hardships of varying sorts befell them; a near tragedy and possible death afflicted them. They returned from a month's wanderings to electrify their countrymen with their tales of what Nature, unknown to us, had so marvelously accomplished through fire and ice in the long ago." p.7 Eberstadt 114:844. (Inventory #: 4610)
$75.00 add to cart Available from
Tschanz Rare Books
Share this item

Rufus B. Sage: His Letters and Papers, 1836-1847. With an annotated reprint of his 'Scenes in the Rocky Mountains and in Oregon, California, New Mexico, Texas, and the Grand Prairies'

Glendale, CA : Arthur H. Clark Company , 1956
(click for more details about Rufus B. Sage: His Letters and Papers, 1836-1847. With an annotated reprint of his 'Scenes in the Rocky Mountains and in Oregon, California, New Mexico, Texas, and the Grand Prairies')

Overland to the Pacific: A Narrative-Documentary History of the Great Epochs of the Far West

Denver : Stewart Commission of Colorado College and The Denver Public Library , 1941
(click for more details about Overland to the Pacific: A Narrative-Documentary History of the Great Epochs of the Far West)
View all from this seller>