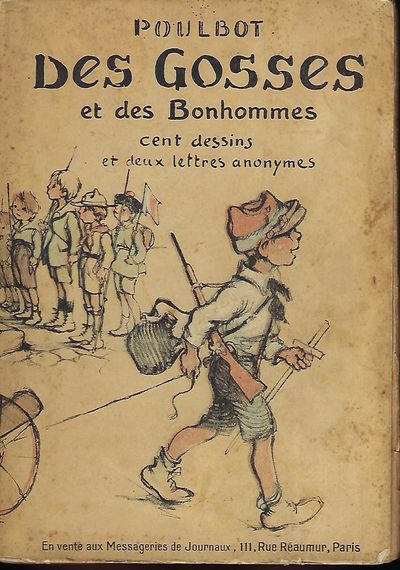 by POULBOT, Francisque
[Paris: Printed By The Author At The Presses Of H. Chachoin,a, 1916. First Trade Edition. A separate edition of 100 signed & numbered copies were also printed on Japanese paper. Poulbot takes a look at Parisienne street children and adults during World War I. Poulbot [1879-1946] was a French offichiste (literally "poster designer"), draughtsman and illustrator. Leaving to fight on the Front in 1914, he was sent back to Paris a year later. During the First World War, his patriotic posters and postcards led to the Nazis putting him under house arrest during World War II. This book is a collection of his drawings of children and adults during World War I. The French term "poulbot" refers to illustrations representing Parisian "titis" or street children. Poulbot died in Paris on 16 September 1946 and was buried in Montemartre Cemetery. With an interesting note of the front endpaper: "John Hoar. Paris 1918. Reflections typical of the War.. 12mo., color pictorial wraps; unpaginated. En vente aux messageries de Journaux [On sale at newspaper couriers]. Illustrated by the Author. Text In French.. Very Good (some soil covers with few creases to spine & one to rear cover; contents clean & tight with a couple of pages still uncut). (Inventory #: 57232)
$75.00 add to cart or Buy Direct from Antic Hay Books
Share this item
Antic Hay Books
Offered by