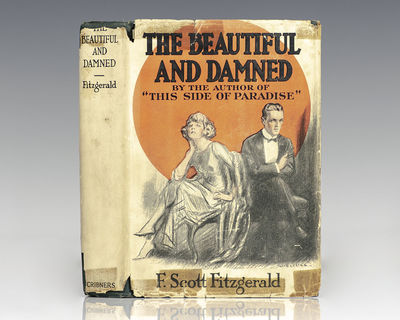 by Fitzgerald, F. Scott
New York: Charles Scribner's Sons, 1922. First edition, first state of the author's second novel. Octavo, original green cloth, titles to the spine in gilt. Near fine in a very good second issue dust jacket with some unnecessary tape repair to the verso, name to the front free endpaper. Uncommon in the original dust jacket. F. Scott Fitzgerald's second novel, The Beautiful and Damned, was a pivotal book in his career. A trenchant satire of the Jazz Age, it is very much a novel of its times. It tells the story of Anthony Patch, his relationship with his wife Gloria, his service in the army, and his alcoholism. The novel provides an excellent portrait of the Eastern elite as the Jazz Age begins its ascent, engulfing all classes into what would soon be known as the Café Society. (Inventory #: 119223)
$2,250.00 add to cart or Buy Direct from
Raptis Rare Books
Share this item