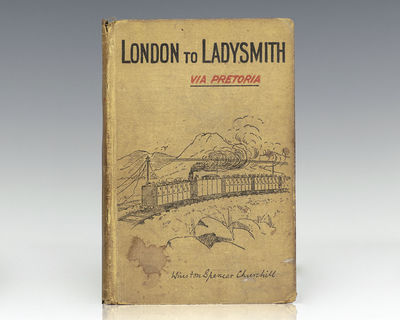 by Churchill, Winston Spencer
London: Longmans, Green, 1900. First edition of Churchill's fourth book and personal record of his impressions during the first five months of the Second Boer War. Octavo, in original cloth, with three folding maps (one printed in color). In very good condition. When the Boer settlers in South Africa rebelled against British authority, Churchill joined with the 21st Lancers and "secured an assignment as press correspondent to the Morning Post... He had scarcely arrived [in South Africa] before he was involved in a skirmish which found him 'in durance vile': a prisoner of war in Pretoria, unable to talk himself out of prison by claiming to be a reporter, and nearly mad over the lack of action. Typically, he made a daring escape... The true-life adventure story of his successful escapade dominates this book, one of the most gripping in the canon, making this one of his most popular books" (Langworth). (Inventory #: 119411)
$650.00 add to cart or Buy Direct from
Raptis Rare Books
Share this item