The Mole People [*SIGNED* by two of the film's stars] 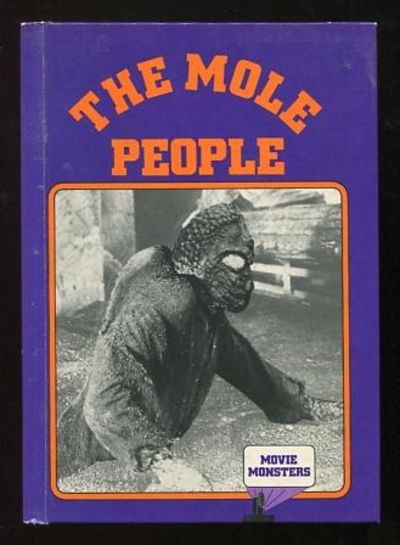 by Green, Carl R., and William R. Sanford; adapted from a screenplay by Garrett Fort [see notes]
Mankato MN: Crestwood House. Near Fine. (c.1985). First Edition. Hardcover. (pictorial boards/no dust jacket, as issued) [minor wear to extremities only]. (Movie Monsters) Series (B&W photographs) INSCRIBED and SIGNED by the two stars of the 1956 sci-fi/horror film: "To _____ / Underground living can / be fun / John Agar || To _____, / It was fun! / Cynthia Patrick." A highly simplified adaptation, designed for elementary schoolkids, of the pretty-simple-to-begin-with movie about the titular characters, who are enslaved to a civilization of albinos; illustrated with numerous stills from the film. Quite apart from its uniqueness as an autographed item (I really can't imagine that too many copies of this were presented to the stars for their signatures), for film scholars it presents a bit of a credits controversy, to wit: the title page states that the book was "adapted from a screenplay by Garrett Fort," but both IMdB and the AFI Catalog credit the film's screenplay to László Görög. What's going on here? If you know the name Garrett Fort at all -- and good for you if you do! -- it will likely be from his writing credits on two classic Universal monster films: DRACULA (1931) and FRANKENSTEIN (1931). In terms of his putative contribution to THE MOLE PEOPLE, however, it's worth noting that (a) a scan of his dozens of screen credits do not turn up anything related to moles, mutant or otherwise; and (b) he died in 1945. (That sound you hear is László Görög, rolling over in his grave at the thought of a generation of young readers being unaware of his cinematic achievement.) For more on the Garrett Fort mystery, see our listing for the companion volume, "Tarantula." Signed by Associated . (Inventory #: 26208)
$100.00 add to cart Available from ReadInk
Share this item
ReadInk
Offered by