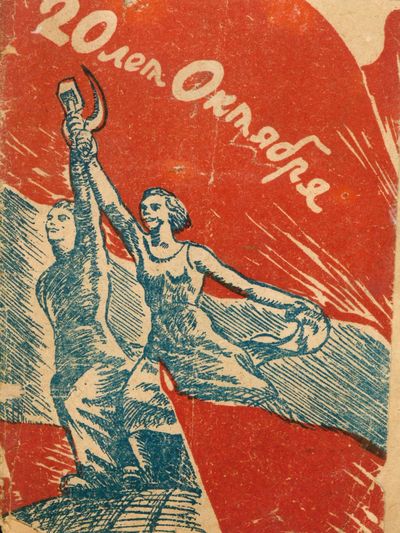 by Vartanov, A., editor
Baku: Izdanie gazety "Vtuzovets", 1937. Small octavo (14.5 Ã— 10.5 cm). Original pictorial wrappers; [16] pp. Text printed in blue ink. Wrappers worn and chipped, with partial restoration to rear wrapper; beginning to detach; contents good. Scarce celebratory songbook published in Baku, the capital of Soviet Azerbaijan, on the twenty-year anniversary of the October Revolution, featuring famous tunes such as the Internationa, "Pesnia o Staline" ("Song about Stalin), "Konarmeiskaia", "Stepnaia-Kavaleriiskaia", "Leisia, pesnia, na prostore", "Pesnia o Kakhovke", "Partizan Zhelezniak" and many others, many of them taken from popular movies of the period. All texts are in Russian, but with the title and imprint printed in Azeri to the rear wrapper. One of 1000 copies printed. Rare provincial edition, not held by the Russian State or National LIbraries. As of November 2020, not located in KVK and OCLC. (Inventory #: 51092)
$300.00 add to cart or Buy Direct from
Bernett Penka Rare Books
Share this item