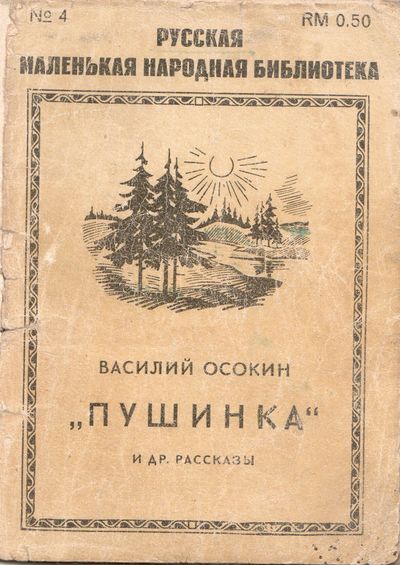 by Osokin, Vasilii
[Plauen]: Izdatel'stvo Inostrannoi Literatury (Fremdsprachen-Verlag G.m.b.H.), [1944]. 12mo (14 × 10 cm). Original staple-stitched printed wrappers; 64 pp. Rather worn; front and rear wrapper detached and separated; overall wear and creasing to text. First and only edition of this book of short stories by Vasilii Osokin, a lieutenant of the Russian Liberation Army (ROA) and the personal secretary of General A. Vlasov, about whom little is known. He appears to be the author of an early biography of Vlasov, first published in 1944 at the ROA Propaganda school in Dabendorf, near Berlin: "Andrei Andreevich Vlasov: kratkaia biografiia s prilozheniem Prazhskogo manifesta" (a short biography, supplemented with the text of the Prague Manifesto). The present book contains four short stories attributed to Osokin, all written in an entertaining manner, but set against the backdrop of a critical depiction of Soviet society, with its atmosphere of unfreedom and danger. The rear wrapper contains adverts for three newspapers and journals published by the Fremdsprachen-Verlag, including "Trud" and "Pahnia", aimed respectively at Russian workers in German factories and farms, as well as the illustrated propaganda journal "Na Dosuge" (Spare time). Like the book series, these periodicals were intended for the large community of Russian-speaking foreigners in the region, which included both voluntary collaborators and forced laborers from the East (Ostarbeiter), as well as for active members of the Russian Liberation Army forces and, presumably, prisoners of war.The publisher was founded as a private enterprise in 1941, but was in reality a covert operation that was part of Goebbels' Propaganda Ministry and staffed with leading foreign collaborators of the Nazi regime. It published numerous periodicals for the occupied territories, such as the famous "Signal", as well as more specific propaganda leaflets, as needed. As the war went on, it became ever more pressing to influence foreign populations via propaganda, rather than forcibly deporting or repressing them, and thus the production increased after 1943, when the publisher moved to Plauen, near Chemnitz. At one time, the enterprise had 352 employees. Eventually, the publishing house was destroyed during Allied air raids in 1945.See especially: Thomas Schiller, NS-Propaganda für den "Arbeitseinsatz" (1998).Of great rarity. Not in Savine. As of November 2020, not in KVK, OCLC. Not held by the Russian State or National Library. (Inventory #: 51089)
$550.00 add to cart or Buy Direct from
Bernett Penka Rare Books
Share this item