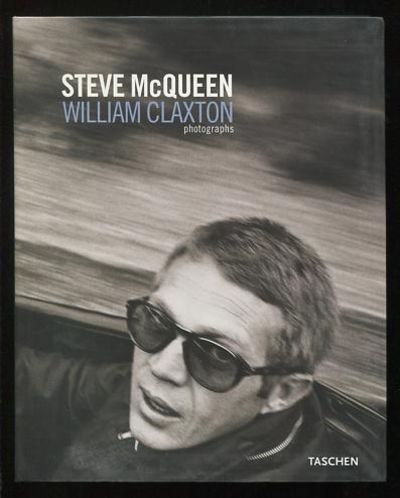 by Claxton, William; edited by Steve Crist
Köln: Taschen. Fine. (c.2004). 1st Edition (see notes). Flexible card covers. (flexible card covers; no dust jacket, as issued) [nice clean copy, as-new, with no discernible wear]. (B&W and color photographs) 100+ photos of the iconic actor, taken during the early period of his superstardom, the mid-1960s. This book appears to be a revised edition (with German and French text, in addition to the original English) of a very similar book published by Arena Editions in 2000, although not acknowledged as such in the book itself. (I cannot vouch for the photographic content being identical with the original.) Taschen also published a hardcover edition, in a slightly larger format, in 2008 (a copy of which is also for sale from ReadInk). This quote is from the Arena edition: "Claxton, who worked and played with his pal for over a six-year period of time [1962-1968], has captured on film not only McQueen's talent and perfectionism, but also his tender, sensitive side and his puckish humor. The actor rarely revealed his most appealing characteristics publicly, but did so in the presence of his close friend. Along with these photographs, most of which have never been published before, are Claxton's memories and recollections, including anecdotes creating a very personal and new vision of McQueen." The Afterword is by Steve's son Chad. **** NOTE that additional shipping charges will be assessed for international shipping of this moderately heavy book, or for Priority Mail service to U.S. destinations. If this concerns you, please contact us for a shipping quote before placing your order. **** . (Inventory #: 26222)
$50.00 add to cart Available from ReadInk
Share this item
ReadInk
Offered by