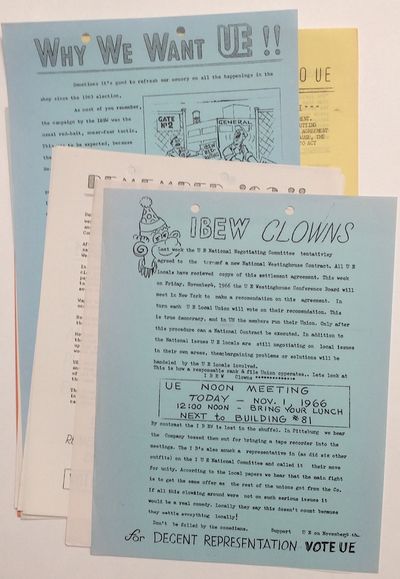 by United Electrical, Radio and Machine Workers of America
San Jose and Sunnyvale: UE Organizing Committee, [196-]. An assemblage of materials from UE organizers, mostly working with Westinghouse electrical workers. Mainly from the mid-1960s. Most are 8.5x14 or 8.5x11 inch mimeographed sheets. A large proportion are connected with election campaigning against the competing IBEW, one from 1960 is defensive about the right of the "red" UE to work on security-related projects such as atomic submarine parts. All have two neat holes punched at top for filing; this doesn't impinge on more than one or two letters of the textual content. Otherwise mostly crisp and clean. (Inventory #: 258537)
$60.00 add to cart or Buy Direct from Bolerium Books
Share this item