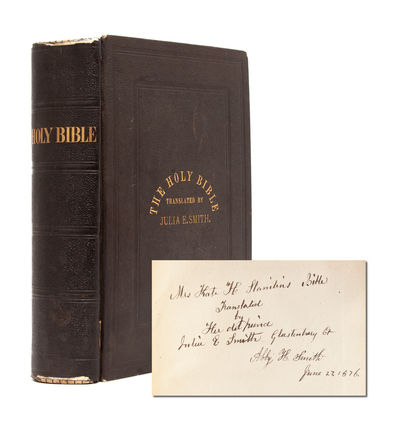 by [Smith, Julia, translator]
Hartford: American Publishing Co, 1876. First edition. First appearance of the Julia Smith translation, one of 950 copies bound in cloth from a total issue of 1,000.Â Dark brown cloth ruled in blind and titled in gilt with gilt spine. Red speckled edges. Collates complete: [2], [1-3], 4-892, [1-3], 4-276. (Pagination restarts at 1 for the New Testament.) Some loss to spine extremities and rubbing to cloth of corners. Front hinge starting but holding well. Bushnell Sage Memorial Library stamps to front pastedown and endpaper. In all a bright, and fresh copy of the first full translation of the Bible ever published by a woman. The present copy was inscribed by the translator, Julia Smith, and her sister-assistant Abby H. Smith in the year of publication to a close family friend: "Mrs. Kate H. Hamlin's Bible, Translated by her old friend Julia E. Smith Glastonbury Ct." with the additional signature below "Abby H. Smith. June 27, 1876."

"Of all the Biblical scholars and translators to have worked on the Bible, Julia Evelina Smith is said to be the most interesting and most overlooked. A self-published professional translator and American women's suffrage activist, Smith was the first woman to translate the Bible, doing it from its multiple original languages into English" (Mota). Together with her sister Abby, a self-trained poet and linguist, she independently funded the project in its entirety. Not surprisingly for sisters who were "engaged in the tax resistance and suffrage movements in Connecticut, where the pair were born," Julia and Abby approached their work as activist as well as scholarly and spiritual in nature. After all, Julia wanted the project to support the cause of equality and "hoped to demonstrate that women should have the right to vote because they were not intellectually inferior to men" (Speedie). The project also posed an opportunity for supporting women as craftspeople and business owners, showcasing their capability for producing fine material books. To this end, Julia "selected a publishing house where the typesetting, operation of the presses, and editing were all done by women" (Speedie). In every sense, the sisters created a "feminist Bible" that remains a milestone in women's history (Stern).

Presented by Smith and her sister to a close family friend, who appeared in Julia Smith's will as the recipient of "a silk bed quilt containing 7,000 pieces" (Historical Society of Glastonbury). (Inventory #: 4026)
$16,500.00 add to cart or Buy Direct from
Whitmore Rare Books
Share this item