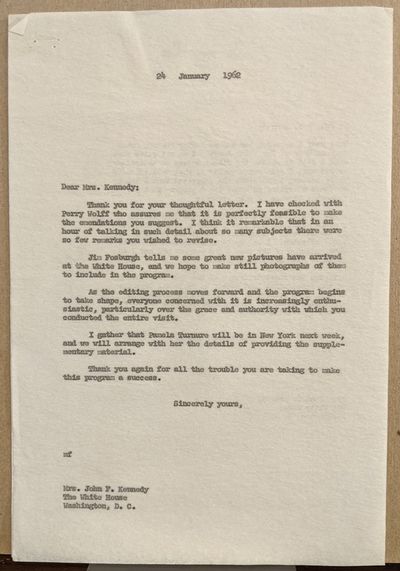 by KENNEDY, Jacqueline (1929 - 1994)
Washington, 1962. fine. Outstanding and historically important T.L.S. as First Lady, 4to. 2 pages, White House stationary, Washington, providing CBS News Correspondent Charles Collingwood with her original Continuity Script Corrections for the up-coming award winning television documentary special "A Tour of the White House with Mrs. John F. Kennedy", which aired on February 14th 1962, in part: It was you who made it easy - - as I am uncomfortable at that kind of thing - - and all the efficiency of CBS Franklin Schaffner and Perry Wolff. Jim Fosburgh says you need four more minutes, and there also are a few more corrections, I'd like to make. I list below the exact sentences I'd like to say in each room, so you can either work them in to our existing conversation or change them when I tape it - - so that they fit. 1) Curator's Office - - Name donors of Van Buren Chest and American pottery. 2) Diplomatic Reception Room - - "All this superb American Furniture was accepted by the Eisenhower's, we just added the wallpaper." 3) Upholstery Room - - When I speak of making a catalog so nothing will be lost again, add, "And so that all donors will be given credit in a booklet that everyone can see." 4) East Room - - When you ask about Art and Government, "art has a vital place in everyone's life." 5) Front Hall - - When I mention only other Stuart in White House, "except for a head of George Washington in the Cabinet Room, given about 10 years ago, by the Charles Payson's, in memory of their son." 6) Green Room - - Where I talk about a gift of Washington mirror, this should be changed to loan. Where I talk about Mrs. Noun coming in, this should be changed to wrote us. Also plan to add here mention of Painting Committee and 4 or 5 American paintings which they have acquired. "Niagara Falls", Coopsey Landscape, "Naval Battle of 1812", still lifes, a Charles Wilson Peale, a Raphael Peale, etc. I will also add a sentence about why no modern pictures. At the beginning when I say these card tables dictated the style of room, add, "It is what an American parlor of 1800 would have looked like at the time of Adams and Jefferson." 7) Monroe Room - - Change sentence where I say "It shouldn't have been called that" to "It just came to be called that". 8) Lincoln Room - - When I say Theodore Roosevelt and Louis Howe slept in Lincoln's bed, change to "Theodore Roosevelt and Calvin Coolidge slept in this bed." Where I say we keep yellow paper on the Gettysburg Address, change to "they have always kept, etc." Most of these should be very easy to fit into the tape - - except for perhaps the Green Room. . . " This ground-breaking documentary showed Kennedy on a tour of the White House with CBS News Correspondent Charles Collingwood. The videotaped tour was the first glimpse the American public had had of the two-million dollar restoration of the White House that Jackie had helped direct in the first year of her husbands Presidency. In a most unusual arrangement - Jackie played a big part in the negotiations for the Broadcast rights and it was agreed that all three major networks (CBS, NBC and ABC) would jointly fund the project...and air it on separate nights. The show was viewed by 80 million viewers and globally syndicated to over 50 countries. According to the Museum of Radio and Television the show holds the distinction of being the first prime-time documentary specially designed to appeal to a female audience. Shortly after the original broadcast Jackie Kennedy and Perry Wolff (the producer) co-authored a companion book with the same title, based on the film, published by Doubleday in 1962. ALSO: Charles Collingwood's January 24th 1962 retained carbon response to Jackie's letter -- giving her assurances that her corrections and edits are "perfectly feasible". AND: A second retained carbon letter to Jackie, April 24th 1963, whereby he has been awarded the George Foster Peabody Award, in part: "...This week I accepted the Peabody Award for our tour of the White House. I am not quite sure what I said in making the ritual noises of acceptance except that I paid you a number of what were intended to be dashing compliments and suggested that I had no business accepting an honor for a program that was memorable because of your presence. Since this is no more than the truth, I am sending you the medal and the citation which accompanied it. It may serve as a souvenir of what really was an historic occasion. I am regularly astonished by continuing evidence of the impact the program had and I am proud to have been part of it..." A rare and important archive directly connected to Jacqueline Kennedy's most important accomplishment as First Lady. All items are in Fine condition. KENNEDY, Jacqueline (1929 - 1994) American writer, literary editor, and socialite who became First Lady of the United States; as the wife of President John F. Kennedy. (Inventory #: 298415)
$6,500.00 add to cart or Buy Direct from
Argosy Book Store
Share this item

Voyaging; Southward from the Strait of Magellan

New York : Putnam , 1924
(click for more details about Voyaging; Southward from the Strait of Magellan)