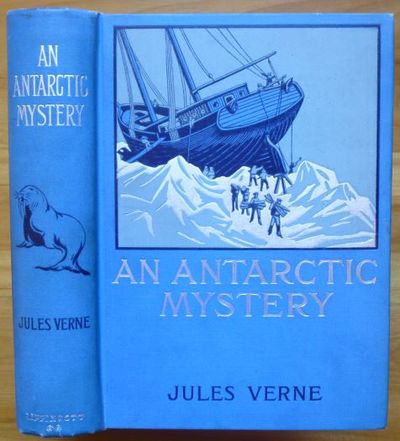 by Verne, Jules
1899. [a brilliant copy] Translated by Mrs. Cashel Hoey. Illustrated. Philadelphia: J.B. Lippincott Company, 1899. Original steel blue cloth pictorially decorated in black, grey and silver. First American Edition. Jules Verne wrote this as an original sequel to Edgar Allan Poe's The Narrative of Arthur Gordon Pym (1838). Captain Len Guy goes to the Antarctic to trace the fate of his brother's ship, which had disappeared with Arthur Gordon Pym aboard. Verne had always been an ardent admirer of Poe, and in 1864 had written a long article on him, "Edgar Poe et Ses Oeuvres." This tale was first published in French in 1897, as LE SPHINX DES GLACES ("The Sphinx of the Ice"). Sampson Low published the British edition in October 1898. A month later (though dated 1899) Lippincott published this first American edition, the same translation. Beginning at about the same time, the tale was serialized in Boy's Own as CAPTAIN LEN GUY. This copy is in steel blue cloth; we have also had copies in red, grey, or olive-green cloth (no priority, but this blue cloth decorated in black, grey and silver certainly provides a sense of the Antarctic ice). This is, quite simply, a remarkably fine, bright copy -- virtually as new, with none of the erosion of the silver decoration that is so common for this book. Taves & Michaluk VO46. (Inventory #: 14628)
$1,950.00 add to cart or Buy Direct from
Sumner & Stillman
Share this item

1894
(click for more details about PUDD'NHEAD WILSON. A Tale)
View all from this seller>