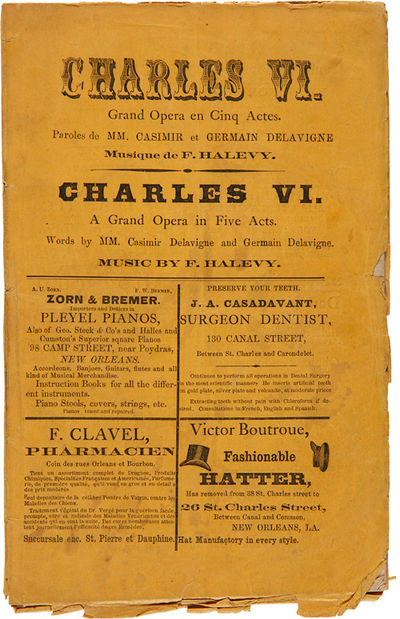 by Delavigne, Casimir and Germain: Halevy, F.: Schweitzer, Jean, editor
Napoleonville: Imprimerie du Pionnier de L'Assomption, 1859. 32pp. In French and English. Original printed wrappers. Some light soiling, staining, and edge wear to the wrappers. Moderate foxing. Very good. An uncommon work printed in the small village of Napoleonville, about seventy miles west of New Orleans. The text contains a libretto focused on the life of Charles VI by Casimir and Germain Delavigne presented in parallel French and English, along with a list of characters and the orchestra director, scene painter, and stage manager for the local production. In addition to the text of the opera, the inside front and both sides of the rear wrapper contain advertisements for various New Orleans businesses, including the Septoline Oil Company, a gun dealer named J. Saget, The Caxton Press Printing Office, and various restaurants, pharmacists, and piano dealers. This opera was written by the Delavignes - with music by Fromental Halevy in 1843, and performed all over the world before this appearance in New Orleans. The play centers on the psychotic French King Charles VI, who battles English invaders to his death. The climax sees the Dauphin, son of Charles VI, restored to his rightful place as heir to the French throne. An obscure Louisiana imprint, demonstrating the interest in bringing culture and entertainment to the French-speaking population of the rural parts of the state on the eve of the Civil War. OCLC records eleven total physical copies, and another copy resides at the Historic New Orleans Collection. OCLC 2972574, 950936423. (Inventory #: WRCAM56029)
$350.00 add to cart or Buy Direct from
William Reese Co. - Americana
Share this item