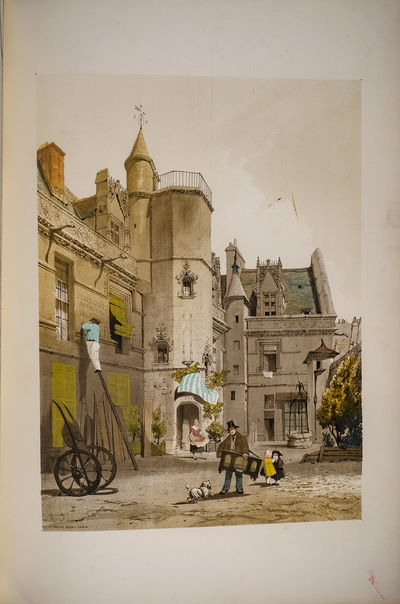 "A very beautiful book, and one that should take preference over its later and more popular rival, the Original Views of London [by Boys, from] 1842...Apart from the brilliance, sensitivity, and technical mastery of the drawing on stone there is the great, and often under-estimated, technical and artistic achievement of Hullmandel in making possible the transmission of such drawings, and in developing the cool, transparent, graduated tints, subtle in colouring, on which the unique effect of the book depends..." (Abbey).

"...A genuine triumph...by Thomas Shotter Boys, a rather neglected artist who merits a far higher place than he was ever awarded in the annals of the English water-colour school...In this book Boys is head and shoulders above them all. His drawing is refined and sensitive, and his colouring cool, simple, and direct" (Hardie).

"Our recommendation of it to all who love and can appreciate art cannot be given in terms too strong; it is worthy of the highest possible praise. The Work is of exceeding beauty" (Art Union, 1839).

"Apart from the brilliance, sensitivity and technical mastery of the drawing on stone, this volume features Hullmandel's great and often under-estimated technical and artistic achievement in making the transmission of such drawings possible and in devolving the cool, transparent, graduated tints - subtle in colouring - on which the unique effect of the book depends" (Bobins II, 512).

Thomas Shotter Boys (1803-1874) was an English watercolor painter and lithographer. He was articled to the engraver George Cooke. When his apprenticeship came to an end he went to Paris where he met and came under the influence of Richard Parkes Bonington, who persuaded him to abandon engraving for painting. Some sources describe him as a pupil of Bonington, although William Callow, who later shared a studio with him in Paris, disputed this. He exhibited at the Royal Academy for the first time in 1824, and in Paris in 1827. In 1830 he went to Brussels, but returned to England on the outbreak of the revolution there. Paying another visit to Paris, he remained there until 1837, and then returned to England in order to lithograph the works of David Roberts and Clarkson Stanfield.

His most important work, Picturesque Architecture in Paris, Ghent, Antwerp, Rouen, etc., a collection of color lithographs, appeared in 1839, attracting a great deal of admiration. Drawn on the stone by Boys and printed by Charles Joseph Hullmandel, it was described in a review in the Polytechnic Journal as "the first successful effort in chromo-lithography hitherto brought to perfection".

Oxford: Printed by Leon: Lichfield... for Rob: Young, & Ed. Forrest, 1640
(click for more details about Of the Advancement and Proficience of Learning or the Partitions of Sciences IX Bookes)