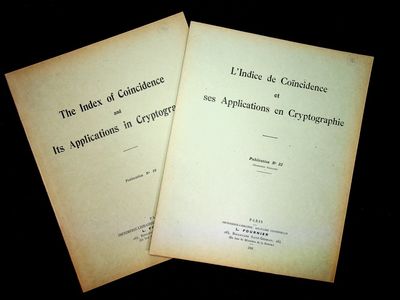 by [ Friedman, William F. ] [ Cartier, General ]
Paris: Imprimerie-Librairie Militaire Universelle, L. Fournier, 1921. First Edition. Wraps. Near Fine. First Edition. Publication No 22 (English): 87 pages; WITH Publication No 22 (French): 91 pages. Together 2 volumes. Lacks the rare English and French 8 page appendix inserts. Publisher's stiff tan wrappers with black printed front cover duplicating title page. Hinges reinforced with white linen tape (as issued). Self wraps, printed titles in black on front cover. Clean copies with a touch of wear and edgewear, and minor browning to the extremities. English edition has creasing to the rear cover and has been read (some spine slant). Wraps. A restricted publication not available to the public at the time of issue, it appears in a few institutional collections, but is rarely found on the market. 'Riverbank Publication No. 22, written in 1920 when Friedman was 28, must be regarded as the MOST IMPORTANT SINGLE PUBLICATION IN CRYPTOLOGY. It took the science into a new world...it described the solution of two complicated cipher systems. Friedman however, was less interested in proving their vulnerability than he was in using them as a vehicle for new methods of cryptanalysis. Fabyan had the pamphlet printed in France in 1922 to save money. General Cartier saw it and thought so highly of it that he had it translated and published forthwith - false-dating it "1921" to make it appear as if the French work had come first! In it, Friedman devised two new techniques. One was brilliant. It permitted him to reconstruct a primary cipher alphabet without having to quess at a single plainletter text. But the other was profound. For the first time in cryptology, Friedman treated a frequency distribution as an entity, as a curve whose several points were causally related, not as just a collection of individual letters that happen to stand in a certain order for noncausal (historical) reasons, and to this curve he applied statistical concepts. The results can only be described as Promethean, for Friedman's stroke of genius inspired the numerous, varied, and vital statistical tools that are indispensable to the cryptology of today. ... This is why Friedman has said, in looking back over his career, that The Index of Coincidence was his greatest single creation. It alone would have won him his reputation. But in fact it was only the beginning.' (Kahn) Authorship attribution from Galland. Galland also notes 'This work bears imprint 1922, but antedates the French translation noted below [1921]; reprinted later but also with imprint 1922. The study was completed in 1920.' Galland also notes Riverbank Laboratories as the imprint - we've chosen to note the imprint as it appears on the actual item.

See J.S. Galland, An Historical and Analytical Bibliography of Cryptology, page 68. See also Kahn, The CodeBreakers, 1996, p376-384, Shulman, An Annotated Bibliography of Cryptography, 1976, pp 84-5 (noting that the French translation was by General Cartier rather than arranged by him, and noting that both were printed in Paris by Col. Fabyan as anonymous publications). (Inventory #: 28186)
$1,650.00 add to cart or Buy Direct from Kuenzig Books
Share this item

London, England and chicago, Illinois : Microscope Publications , 1975
(click for more details about A Short History of Early American Microscopes)
View all from this seller>