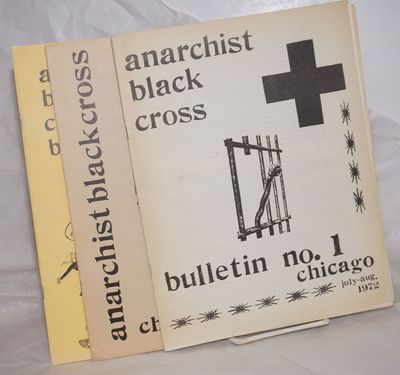 Chicago: Chicago Anarchist Black Cross, 1974. Three issues of the bulletin, spanning the period between July 1972 and January 1974. Issues present are Nos. 1, 5, and 7. 13, [12], and 16p. respectively, stapled wraps, 8.5x11 inches, No. 1 fold-creased and with sticker shadow and address stamp on rear wrap, No. 5 with pen notation on front wrap else generally very good condition. Bulletin of the support network for political prisoners. Articles on the Red Army Faction (aka the Baader Meinhof Gang), anarchist prisoners in Spain, and more. (Inventory #: 258898)
$75.00 add to cart or Buy Direct from Bolerium Books
Share this item