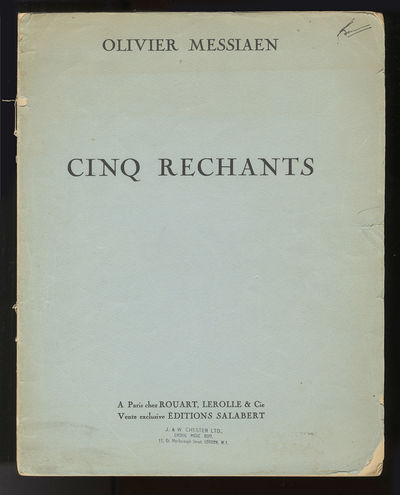 Ex libris noted musicologist Stanley Boorman, with his signature to corner of upper wrapper; annotations in pencil throughout.

Cinq Rechants premiered in Paris at the Salle Erard in 1949 by Chorale Marcel Couraud.

"The Tristan trilogy of 1945-8 [including Turangalîla, Harawi, and Cinq rechants]- is a mirror of divine love. The three compositions are quite separate in most respects but that of subject, and there is no narrative continuity in any of them: Messiaen's style effectively precludes such continuity, lending itself instead to sectional forms and thereby to fragmented stories. ...Cinq rechants, more compact than the other two, is a succession of verse-refrain forms in which meaningful phrases are delivered in a forest of onomatopoeic noises and freshly imagined choral textures. Neither here nor in Harawi (both works have words by the composer) is there any explicit mention of God, but the love that both celebrate is seen on a cosmic scale. It can be represented in the symphony by gentle caressing gestures and by virtual stasis ('Jardin du sommeil d'amour'), but it can be represented too by the energy of strongly pulsed fast rhythm, the energy that the work's great central dance, 'Joie du sang des étoiles', projects as streaming through the universe." Paul Griffiths in Grove Music Online. (Inventory #: 33707)
$83.00 add to cart or Buy Direct from
J. & J. Lubrano Music Antiquarians
Share this item