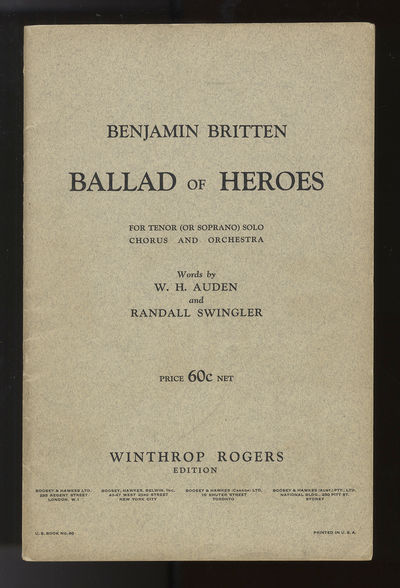 Ballad of Heroes premiered at the Queen's Hall, London at the Festival of Music For the People, conducted by Constant Lambert, on 5 April 1939.

Benjamin Britten is perhaps the most important "among several pairs of composers who dominated English art music in the 20th century. Of their music, Britten's early on achieved, and has maintained, wider international circulation ... Notable among his musical and professional achievements are the revival of English opera, initiated by the success of Peter Grimes in 1945; the building of institutions to ensure the continuing viability of musical drama; and outreach to a wider audience, particularly children, in an effort to increase national musical literacy and awareness. Equally important in this was his remaining accessible as a composer, rejecting the isolationism of the postwar avant garde and developing a distinctive tonal language that allowed amateurs and professionals alike to love his work and to enjoy performing and listening to it." Jennifer Doctor et al. in Grove Music Online. (Inventory #: 34164)
$50.00 add to cart or Buy Direct from
J. & J. Lubrano Music Antiquarians
Share this item