Napoleon Orders Safe Passage Be Ensured on the Great Alpine Road Connecting France and Italy, the One Used from Hannibal to Constantine to Charlemagne to the French Republic This stretch, the most travelled road between France and Italy, is among the most famous in history, having served as the point of invasion from West to East for two millenia 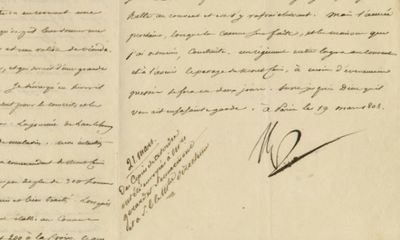 19/03/1808. Napoleon Bonaparte He is concerned about his troops’ health, and wants to make sure they can rest and that they each be given a bottle of wine, bread and meatMont Cenis sits amidst the Alpine mountain range separating Italy and France. The first hospice for travellers was built in 825 by Lothaire the 1st. Destroyed by Saracens in the 10th century, the hospice was rebuilt in the 13th century and maintained until the 18th century by Augustin monks.The pass from France and Italy, along this small path, was no minor place of passage. Most believe it is the place where Hannibal crossed the Alps and is the site of descent of Constantine I into Italy to fight against Maxentius. It was the location of a military victory by the French Army of the Alps, led by General-in-Chief Alex Dumas over Piedmontese forces in April 1794, a victory that enabled the French Army of Italy to invade and conquer the Italian peninsula. It was also used as the main passage by which Charlemagne crossed with his army to invade Lombardy in 773.After the Battle of the Nile in 1798, the British blockaded the French controlled Mediterranean ports and the small path by Mont Cenis became the major route into Italy. Napoleon – who crossed the pass himself at least twice and nearly died during a blizzard – ordered a road be built to improve the movement of supplies. This took time and was often delayed. In the meantime, Napoleon conquered Italy and his expansion into formerly Austrian controlled territory required safe transit and quickly. He ordered his war minister to advance on plans to create a passable road and safe lodging between France and Italy through the mountains.Letter signed, 3 pages, Paris, March 19, 1808, to General Clarke. ""The steps from Chambery to Mont Cenis [100 miles from west to east through the mountains] are very poorly organized. You must propose to me a new organization. The days are too difficult. We must divide the space into days of equal length, while giving the troops a rest at Saint Jean de Maurienne [located halfway between the above 2], which is the only place in the mountains where one can rest.""Once you have taken these steps for this year, you must report to the Interior Minister the locations where the new route will pass. And in the locations where the troops will rest, propose to me the construction of small barracks to accommodate a battalion. These barracks are to be built using the resources available in the country and cost 40 to 50,000 francs instead of the 100,000 francs expended in the large projects of our engineers.""Different projects have been submitted to me for the barracks at Lans le Bourg [adjacent to Mont Cenis]. You must urgently at long last submit a definitive project. I want houses for use in the mountains and not as one would build in Paris. Give orders that the Commander at Mont Cenis be given lodging in the Convent, while awaiting the construction of the barracks and that the troops also be permitted to stay there.""You shall ensure that the officer commanding at Mont Cenis give to each soldier either going to Italy or returning from that place a bottle of wine. I desire also that each be given a good soup and a half ration of bread and a full ration of meat. This will be a minor expense but with great consequence for the health of the soldiers.""I desire that in winter there be a stop at Mont Cenis for conscripts and detachments of fewer than 300 men. The journey from Lans le Bourg to Suze is the source of much sickness. Give orders to the Commander at Mont Cenis that detachments which are not more than 200 men be lodged at the Convent, heated, nourished and well treated. When there are more than 300, 300 shall be lodged at the Convent, 200 at the post office, and 200 at the Grand Croix, which will make up a battalion.""This is for this year and until the 1st of June, at which time the Commanders of the detachments will be able to make the pass in one day, stopping at the Convent to refresh. But the following year, once the barracks have been constructed and the houses built, an entire regiment will lodge at the Convent and in the future the passage from Mont Cenis, excepting pressing engagements, shall be done in two days.""By 1811, this road would be host to wagons, horses and all sorts of transportation. It was for a time the most travelled road between France and Italy. (Inventory #: 20745)
$11,000.00 add to cart Available from Raab Collection
Share this item