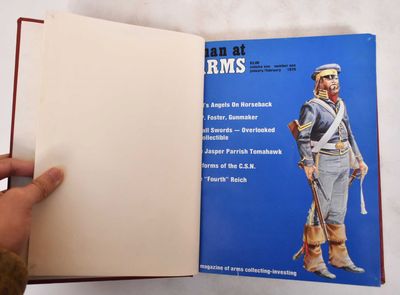 by Mowbray, Andrew (editior)
Providence, Rhode Island: Man At Arms Magazine, 1979. Hardcover. VG. shelf-wear to covers; bumping to corners; upper back cover edge has identation.. red buckram boards w/ gilt spine printing. 7 volumes of approx 448 pgs w/ color & bw illustrations. A wonderful collectible and collection of the venerable 'Man At Arms' Magazine. This edition appears to have been bound and presented to William 'Bill' H. Guthman who was a promient antique and militaria expert. Includes a typed and signed letter on 'Man At Arms' stationary from editor and publisher, Andrew Mowbray. Each issue in this edition includes an article written by Mr. Guthman. Includes the inaugural issue Number One from Jan/Feb 1979 and also: Number Two from March/April 1979, Number Four from July/August 1979; Volume 2, Number Two from March/April 1980, Number Four from July/August, 1980; Volume 3, Number One from January/February 1981 and Volume Four, Number Five from September/October 1982. (Inventory #: 181144)
$100.00 add to cart or Buy Direct from Mullen Books
Share this item