Birch's Views of Philadelphia: A Reduced Facsimile of The City of Philadelphia...as it appeared in the Year 1800 (With Photographs of the Sites in 1960 & 1982) 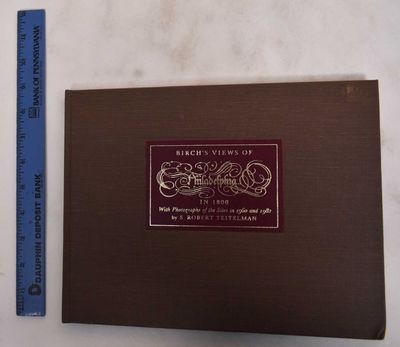 by Teitelman, S. Robert
Philadelphia, PA: The Free Library of Philadelphia, 1982. Hardcover. VG (corners bumped, small faded spot to top front corner of board, inscribed and signed by author on ffep). Brown cloth with gilt spine lettering, red title block on front cover with gilt lettering; marbled end pages; Unpaginated. 29 color plates, numerous bw photos. "Praised by collectors and historians alike, 'Birch's Views,' as an eighteenth-century record of an American city, is incomparable. ... Teitelman's photographs provide a fascinating record of Philadelphia's renewed growth and vitality between 1960 and 1982 and add another dimension to the marvelous visual record provided by William Birch." (dj of Penn Press edition) One of 1250 copies published on the occasion of the three hundredth anniversary of the founding of Philadelphia. Half title: Views of Philadelphia 1800, 1960, 1982 : a comparative record./ Introduction and notes by S. Robert Teitelman and Howell J. Heaney./ Full title of the original: The city of Philadelphia, in the State of Pennsylvania, North America, as it appeared in the year 1800 : consisting of twenty eight plates drawn and engraved by W. Birch & Son. (Inventory #: 181251)
$35.00 add to cart or Buy Direct from Mullen Books
Share this item