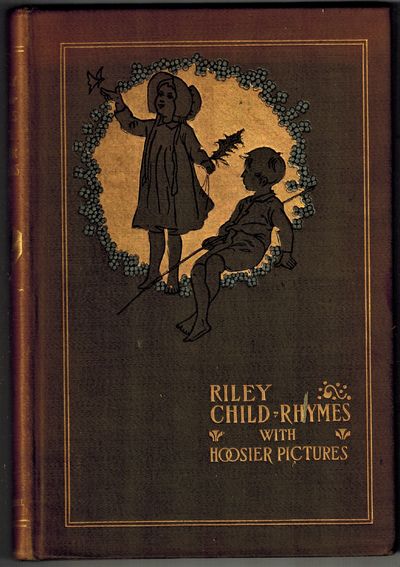 by Riley, James Whitcomb; Pictures by Will Vawter
Indianapolis, IN: The Bowen-Merrill Co., 1898. SIGNED AND INSCRIBED BY AUTHOR on front end page in his distinctive penmanship -" For Mrs. J.G. Hutchinson, With best greetings and esteem James Whitcomb Riley. A souvenir of public readings Ottumwa, Dec. 1, 1903 .....In the golden olden glory of the days gone by." Original olive green cloth decorated in gilt front cover and spine, 4 preliminary leaves, xv-xx pages, 1 leaf, 24-188, (1) pages, illustrations by Hoosier artist Will Vawter. Later Edition, 1898. Originally published in 1890. Near Fine, sunning at edges of front board and spine have toned the olive to a khaki color. Capt. Joseph G. Hutchison (1840-1910), served in the Civil War in the Pennsylvania Volunteer Infantry in the Army of the Potomac. He also served in both chambers of the Iowa State Legislature and was the unsuccessful Republican candidate for Governor of Iowa in 1889. SCARCE SIGNED AND INSCRIBED BY AUTHOR. 61 editions published between 1890 and 2017 in English. "Charming, endearing, enduring; these 39 poems by James Whitcomb Riley touch heart, mind, soul. Vignettes of childhood a century ago, their humanity endures and connects." -Nuvo Newsweekly, December 8, 2010. SIGNED AND INSCRIBED BY AUTHOR. Later Edition. Decorative Cloth. Near Fine/No Jacket, As Issued. 8vo - over 7¾" - 9¾" tall. Presentation Copy. (Inventory #: 008606)
$500.00 add to cart Available from
Dale Steffey Books
Share this item
Dale Steffey Books
Offered by

Darkest Africa at A Century of Progress 1933 : Official Souvenir

by edited by Ada Dufour ; photography by Frank D. Shean