ZAYDE, A Spanish History, or, ROMANCE. Originally Written in French. By Monsieur Segray. Done into English by P. Porter, Esq; 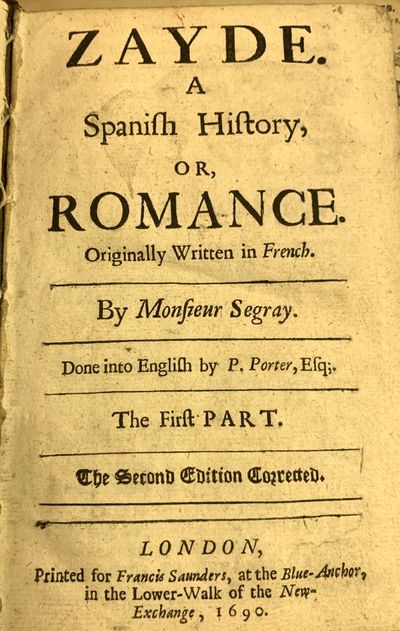 Although the book is attributed to Monsieur Segray, it has long been accepted that it is by the Comtesse de La Fayette. La Fayette holds the enviable place in history of being the author of France's first historical novel [LA PRINCESSE DE CLEVES. 1678], which is now regarded as the 'first great French novel'. Her ZAYDE, here offered, antedated this masterpiece, first appearing in 1670, under Sergrais' name, as did PRINCESSE. ZAYDE is a collection of [loosely] related tales, a la de Scudery's romance, GRAND CYRUS [1649-53], and "is in the main a study of love in its less happy aspects... [with her oeuvre] the authoress may be said to have inaugurated the French novel of character." [OCFL].

The work first appeared in English translation in 1678, here republished in a 2nd edition by Saunders, who, in a preliminary advisement ["The Bookseller to the Ladies"], exhorts the fairer sex to find favor with his offering, stating "... [given the work] had recieved her Ladiships Approbation, [believing it then] would be acceptable to all that had not read it." In other words, an early attempt at gender-targeted marketing.

While not particularly uncommon in an institutional sense [at the time of cataloguing, OCLC records 10 holdings of this 1690 edition in the US], the work, in English translation, we do find it fairly uncommon in commerce, with RBH showing just one copy to auction in the last 3+ decades. (Inventory #: 49171)
$1,750.00 add to cart or Buy Direct from Tavistock Books
Share this item

The INCREDIBLE CASE Of The STACK O'WHEATS MURDERS.; A Limited Edition Folio by Les Krims

[Buffalo, NY?] 1972
(click for more details about The INCREDIBLE CASE Of The STACK O'WHEATS MURDERS.; A Limited Edition Folio by Les Krims)

The ECCENTRIC And EXTRAORDINARY HISTORY Of NATH. BENTLEY, ESQ.; Together with an Accurate Description of his Singular Habitation, Usually Denominated the Dirty Warehouse in Leadenhall Street, with Many Curious and Original Anecdotes, Never Before Published; to Which is Prefixed the Strange and Eccentric Life and Adventures of Lord Rokeby, Whose General Propensity was Living in Water

London : Printed for Tegg & Castleman, at the Marvelous & Eccentric Book Warehouse, 122, St. John-Street, West Smithfield, and Sold by Ch , 1803
(click for more details about The ECCENTRIC And EXTRAORDINARY HISTORY Of NATH. BENTLEY, ESQ.; Together with an Accurate Description of his Singular Habitation, Usually Denominated the Dirty Warehouse in Leadenhall Street, with Many Curious and Original Anecdotes, Never Before Published; to Which is Prefixed the Strange and Eccentric Life and Adventures of Lord Rokeby, Whose General Propensity was Living in Water)
View all from this seller>