WOMEN ON THE MOVE: Summer on the Lakes in 1843, Life in Prairie Land, California In-Doors and Out, California: A Pleasure Trip from Gotham to the Golden Gate 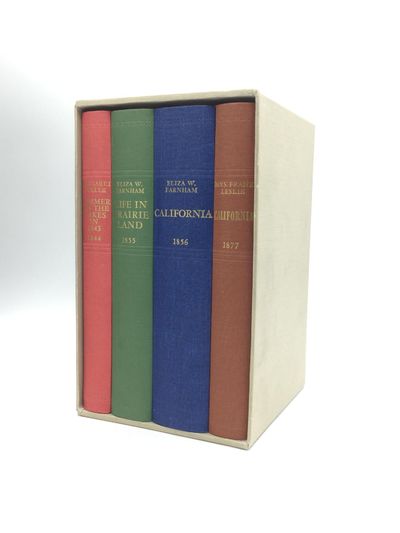 by Fuller, Margaret, Eliza W. Farnham, and Mrs. Frank Leslie
Nieuwkoop: B. de Graaf, 1972. Hardcover. Near fine. Facsimiles of Margaret Fuller's Summer on the Lakes in 1843 (1844), Eliza Farnham's Life in Prairie Land (1855) and California In-Doors and Out (1856), and Mrs. Frank Leslie's California: A Pleasure Trip from Gotham to the Golden Gate (1877). Each includes an introduction by Madeleine B. Stern. Three frontispiece portraits, with textual illustrations, including two folding plates. Small octavo, four volumes. Original red, green, blue, and brown cloth bindings, respectively, with gilt titles. A near fine set. Housed in the publisher's slipcase, which is a trifle soiled. (Inventory #: 72278)
$100.00 add to cart Available from Johnson
Share this item

THE WRECK OF THE MARY DEARE

New York : Alfred A. Knopf , 1956
(click for more details about THE WRECK OF THE MARY DEARE)

New York : Alfred A. Knopf , 2007
(click for more details about AFTER DARK)
View all from this seller>