THE DEVIL IN THE BOOK 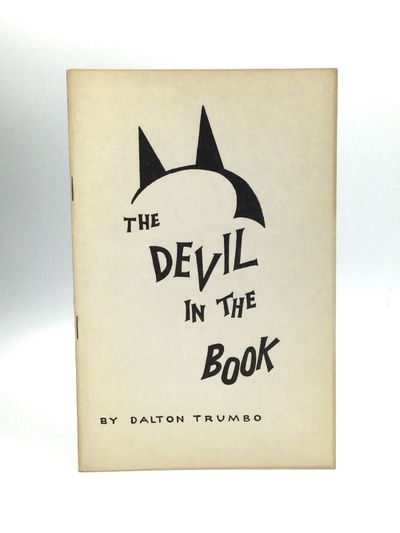 by Trumbo, Dalton
Los Angeles: California Emergency Defense Committee, 1956. First Edition. Wraps. Near fine. This is #250 of a limited edition of 750 copies signed by Dalton Trumbo. The American novelist and screenwriter, who scripted films including Roman Holiday, Exodus, Spartacus, and Thirty Seconds Over Tokyo, Trumbo (1905-76) aligned with the Communist Party in the United States before the 1940s, although he did not join the party until 1943. He was an isolationist. One of the Hollywood Ten, he refused to testify before the House Un-American Activities Committee (HUAC) in 1947 during the committee's investigation of Communist influences in the motion picture industry. He was subsequently blacklisted by that industry, though he continued working clandestinely, writing under other authors' names. This pamphlet, published five and a half years after Trumbo served eleven months in the federal penitentiary in Ashland, Kentucky for contempt of Congress, analyzes the conviction of fourteen California Smith Act defendents: "As the Supreme Court moves to review the Smith Act convictions, the American people must also review them and enter the struggle to overthrow them. The old and not very valorous strategy of tossing Communists to the wolves in despairing hope that the civil rights of all others will then be spared has not worked. The appetite of the Department of Justice and the FBI has proved insatiable." The Smith Act set criminal penalties for advocating the overthrow of the U.S. government and required all non-citizen adult residents to register with the government. A series of Supreme Court decisions in 1957 reversed a number of convictions under the act as unconstitutional. Octavo. Original printed paper wrappers. Typical mild toning to the extremities; else near fine. (Inventory #: 72289)
$250.00 add to cart or Buy Direct from Johnson
Share this item

THE TRYAL OF THOMAS EARL OF MACCLESFIELD, IN THE HOUSE OF PEERS, FOR HIGH CRIMES AND MISDEMEANORS; UPON AN IMPEACHMENT BY THE KNIGHTS CITIZENS AND BURGESSES IN PARLIAMENT..

London : Printed by Sam. Buckley in Amen-Corner , 1725
(click for more details about THE TRYAL OF THOMAS EARL OF MACCLESFIELD, IN THE HOUSE OF PEERS, FOR HIGH CRIMES AND MISDEMEANORS; UPON AN IMPEACHMENT BY THE KNIGHTS CITIZENS AND BURGESSES IN PARLIAMENT..)

by Boyd, Pattie with Penny Junor

London : Headline Review , 2007
(click for more details about WONDERFUL TODAY: The Autobiography)
View all from this seller>