The Twenty-Fifth Anniversary of the House of Geo. Borgfeldt & Company, New York 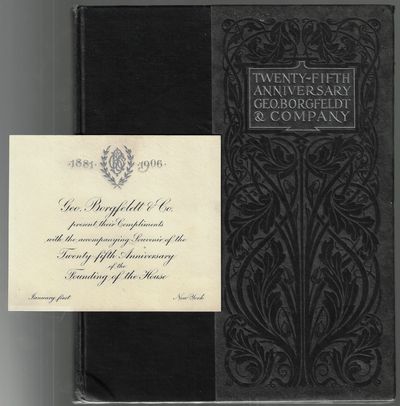 [New York]: Geo. Borgfeldt & Co, 1905. Hardcover. Very good. [84] pp, extensively illustrated with portraits and views of the company's various branches and departments. Bound in half-cloth and dark-green paper-covered boards with lovely art nouveau design stamped in black, endpapers patterened with the company logo, attractive design features throughout. Foot of spine bumped, foxing to last four pages, binding has a little play, but overall a nice copy. Laid in is an embossed compliments card sent with the book, printed on thick cardstock and dated January 1, 1906. Founded in 1881, Geo. Borgfeldt & Company was best known as an importer and distributer of dolls and other toys, but also dealt in china and cut glass, stationery, musical instruments, imported glassware, household furnishings, decorative objects, and a variety of "notions' and "fancy goods." Later in the 20th century, the company would obtain the first major contract to sell Disney character merchandise. According to this book -- the only published history of this successful company - George Borgfeldt "conceived of the idea" of being able to offer Americans merchants easier access to a variety of foreign goods by "assembling in New York samples of the products of the best factories of Europe manufacturing dolls, toys, and kindred articles, and of booking import orders through the display of these samples." His first location, at 83 Leonard Street in New York City, had 6.750 square feet of display space in which 100,000 items were available for inspection by wholesale buyers. The text goes on to describe the evolution of this sales model and the company's subsequent growth. Separate short sections summarize the history of each of the different sales departments. (Inventory #: 21408)
$250.00 add to cart or Buy Direct from Walkabout Books
Share this item

Yosemite, The Big Trees, and the High Sierra, A Selective Bibliography

Berkeley and Los Angeles : University of California Press , 1946
(click for more details about Yosemite, The Big Trees, and the High Sierra, A Selective Bibliography)
View all from this seller>