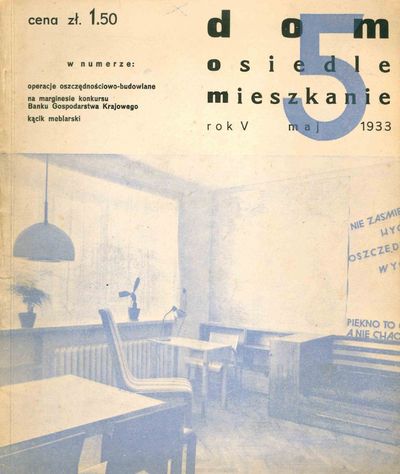 by JÃ³zef Jankowski, SzczÄ™sny Rutkowski, and Teodor Toeplitz, editors
Warsaw: "RÃ³j" (Drukarna Artystyczna and Drukarnia Techniczna Sp. Akc), 1929-1933. Octavos (ca. 22.5 Ã— 16.3 cm). Original pictorial wrappers; ca. 32-64 pp. per issue. Numerous photographs and several pages of advertisements. Occasional light soil and wear to wrappers; a few issues with somewhat more significant wear, but overall about very good. Seventeen early issues (including two double issues) of the most important architecture and design journal of inter-war Poland, founded by Teodor Toeplitz (1875-1937), a housing activist and the president of the Warsaw Housing Cooperative. The journal was aimed at industry insiders as well as housing cooperatives which were growing quickly in the 1920s and early 1930s. It featured articles by leading Polish architects and urban planners, such as Bohdan Lachert, Barbara and Stanislaw Brukalski, Szymon and Helena Syrkus, Josef Szanajca, as well as foreign architects such as Le Corbusier and Erich Mendelsohn, among many others. Topics covered included mass housing and specific housing developments, urban planning, construction, lighting fixtures, furniture, and fabric design, and other matters of interior design and decorating. Richly illustrated with photographs, drawings, and architectural plans, the modern layout of the journal was designed by members of the Constructivist and left-leaning "Praesens" group. A splinter of the avant-garde "Block" group, which focused on visual art, the "Praesens" group (which published an eponymous journal) formed in 1926 to focus on the problems of housing design and architecture. By 1930, seeking a deeper discussion of architectural theory, most of the architects involved with "Praesens" also published in "Dom, osiedle, mieszkanie." The periodical was divided into three parts: "Dom" (home) was edited by the journalist and art critic SzczÄ™sny Rutkowski, "Osiedle" (estate) was the responsibility of the architect and town planner JÃ³zef Jankowski, and "Mieszkania" (cooperative) was put together by Teodor Toeplitz. Initially a quarterly magazine, "Dom" turned into a monthly in 1930 and was published 1929-1938, resuming after World War II in 1946-1948. With industry-relevant advertising to last few pages and rear wrappers. As of July 2020, in North America KVK, OCLC show scattered print issues, mostly of the later years, at the Getty, Columbia, Stanford, and CCA (a single issue). (Inventory #: 50834)
$9,500.00 add to cart or Buy Direct from
Bernett Penka Rare Books
Share this item


(click for more details about Two publications accompanying exhibitions of the work of psychiatric patients in Czechoslovakia: Produkty a symboly: tvorba pacientÅ¯ psychiatrickÃ© lÃ©Äebny v KromÄ›Å™Ã­Å¾i [Products and symbols: the creative work of patients of the psychiatric hospital in KromÄ›Å™Ã­Å¾]. AND: NepoznatÃ¡ tvorba: vÃ½tvarnÃ© projevy z arteterapie a experimentÃ¡lnÃ­ch psychoz [Unknown art: creative expressions from art therapy and experimental psychoses])
View all from this seller>