Tiuremnye "volynki" [Prison "bagpipes" (strikes)]. Along the head of the title: Deshevaia biblioteka. Zhurnal "Katorga i ssylka" no. 36 [Inexpensive library. "Hard labor and exile" journal, no. 36] 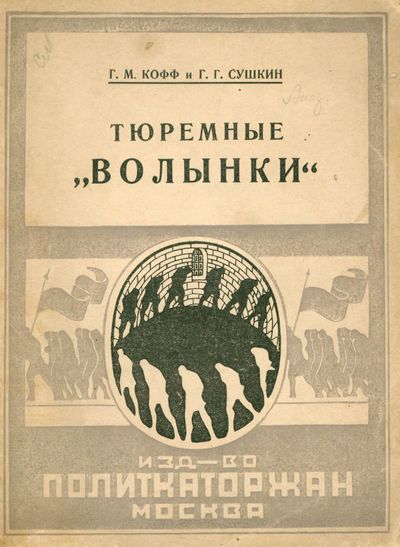 by Koff, G[rigorii] M[oiseevich] and Sushkin, G[avril] G[eorgievich]
Moscow: Izdatel'stvo vsesoiuznogo obshchestva Politkatorzhan i SS.-Poselentsev, 1928. Octavo (18 × 13 cm). Original illustrated staple-stitched wrappers; 24 pp. Light soil to wrappers; slight wear to wrapper edges else very good. A brief history of political prisoner protests staged in Czarist Russia in the lead up to the 1905 Revolution. Published by the Society of Former Political Prisoners and Exiled Settlers. Operating in 1921-1935, at its height this society of "old revolutionaries" counted close to 3000 members. Founded by the powerful old revolutionary Felix Dzerzhinsky, who also created the first Soviet secret police (Cheka), the organization served to commemorate the sacrifices of the formerly imprisoned revolutionaries and to provide them with special aid and privileges, eventually spearheading the creation of a larger organization, International Red Aid (MOPR). The society also published the periodical "Katorga i ssylka" [Hard labor and exile] to which this publication appears to be a special supplement (no. 36). In prison jargon, the "bagpipes" of the title refer to acts of protest or actions that slow down and disrupt the prison order, with this text focused especially on the strikes organized by political prisoners in the Odessa prison in 1903.

The author, Grigorii Koff (1833-1965), was a historian and head of the museum "Katorga i ssylka" [Hard labor and exile] in Odessa in the 1920s, later Museum of the Revolution. Member of RSDRP since 1901, he was arrested on numerous occasions for revolutionary activities and spent three years in prison and exile. Gavril Sushkin (1881-1938) was a former Menshevik revolutionary. In addition to this text he published several other historical works on the Revolutionary movement in Russia including "Bezvestnye" (The unknown ones), dedicated to women active in the 1905 Revolution and one on peasant uprisings during the 1905 Revolution titled "Agrarniki" (Agriculturalists). Sushkin was arrested in 1938 and repressed along with many of the old revolutionary members of the society. Very rare.


(click for more details about Rozhdenie Kino [The Birth of Cinema])