My Life with Chaplin: An Intimate Memoir [*SIGNED*] 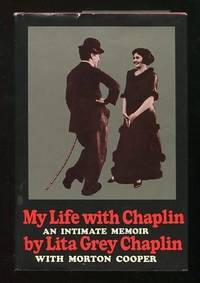 by Chaplin, Lita Grey, with Morton Cooper
(n.p.): Bernard Geis Associates. Fine in Near Fine dj. (c.1966). 2nd printing. Hardcover. [a nice clean book with no significant wear; jacket has one tiny nick at top of front panel, a touch of wear at upper spine corners, a few light surface-scratches, diagonal crease in bottom corner of rear flap]. (B&W photographs) INSCRIBED and SIGNED on the front endpaper: "To Mr. & Mrs. / _______ ______ / Best Wishes / Lita Grey Chaplin / Oct - 1966." A sensational-bordering-on-lurid memoir by Charlie Chaplin's second wife -- a child bride, basically, who "he had taken under his wing at twelve and into his bed at fifteen," and married when she was pregnant at sixteen. Later in her life, she claimed that her co-author, Cooper, had re-edited her original manuscript and introduced numerous inaccuracies, distortions, exaggerations, and fabrications. At the time of her death in 1995 she was at work on another, more truthful memoir, which was eventually published several years later. Signed by Author . (Inventory #: 26287)
$60.00 add to cart Available from ReadInk
Share this item
ReadInk
Offered by