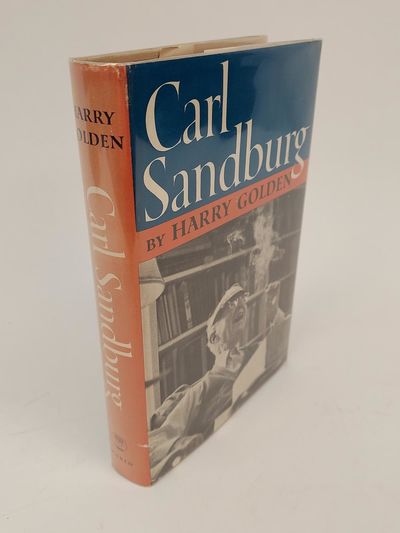 by Golden, Harry; Sandburg, Carl
Cleveland: World Publishing, 1961. First Edition. Hardcover. Octavo; VG/VG; Red spine with black and white lettering; Stated first edition; SIGNED by BOTH Golden and Sandburg; Light wear to dust jacket, toned at spine, now covered by a mylar brodart cover; Boards straight with light edgewear; Binding tight; Pages toned, but free of marking; 287 pages. Shelved in glass case near front desk. Biography of poet Carl Sandburg (1878-1967) told in an upbeat anecdotal style. Sandburg was a noted poet, writer, musician, and thinker. A pacifist, he was a Spanish-American war veteran who later supported U.S. involvement in two World Wars. A supporter of Swedish-style socialism, he had many Republican admirers due to his biographies of Abraham Lincoln. Sandburg's support for such radical ideas as old age pensions, worker compensation, and a minimum wage became mainstream in his life time. Author Harry Golden was a friend and neighbor of Sandburg. Hardcover with dust jacket. 287 pages with black and white photos. Signed by both Sandburg and Golden. 1336098. FP New Rockville Stock. (Inventory #: 1336098)
$60.00 add to cart or Buy Direct from
Second Story Books
Share this item

New York : Doubleday , 2003
(click for more details about THE DA VINCI CODE [SIGNED])
View all from this seller>