The Interest of the Merchants and Manufacturers of Great Britain in the Present Contest with the Colonies, Stated and Considered 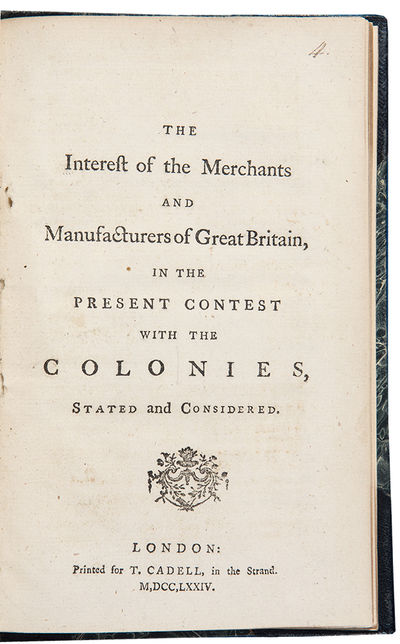 First edition of this work arguing in support of England's colonial claim to the American colonies, published in the midst of the Intolerable Acts.

"Knox is credited with writing this work" (Adams), contending that English commercial interests should support America's colonial connection with England, as otherwise the low production costs and abundant land in America would "presently destroy the commerce and culture of Great Britain." He maintains that England's colonial administration have created the American colonies' success and rebuts the idea that the British "have asserted their claims in an arbitrary, cruel, and unjust manner, as the Colonies say they have." In 1774, at the time of this pamphlet's publication, colonial unrest was already brewing, prompting the British to pass the Intolerable Acts and impose martial law in Boston. In the same year, the Continental Congress would convene for the first time, and soon after, the American Revolution would be underway. Born in Ireland in 1732, Knox was a career bureaucrat who served as the Provost Marshall on the colonial council of Georgia from 1756 to 1762 and was then appointed as the Colonial Agent for Georgia and East Florida. He was a steadfast supporter of the British government and advocated for a paternalistic and limited form of imperial power (Oxford Dictionary of National Biography). While in Georgia, he acquired a large slave plantation and was a vocal defender of slavery, giving him a vested commercial interest in keeping the American colonies under British rule. He was ultimately dismissed from his position in the Georgia Assembly for publishing pamphlets against the Stamp Act. In 1770, he became one of two Undersecretaries of State for the American Department, where he worked under Hillsborough, Dartmouth, and Germain, and continued to influence American policy. A variant issue, without the price at foot of titlepage and without "go" as first word on p. 17.