Grecian Remains in Italy, a Description of Cyclopian Walls and of Roman Antiquities. With topographical and picturesque views of ancient Latium 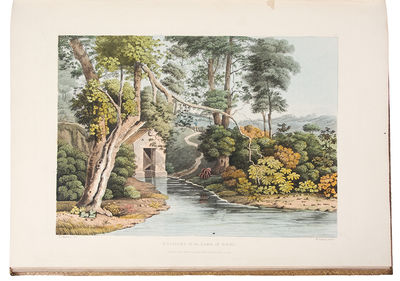 by MIDDLETON, J.J. (1785-1849)
London: Printed for Edward Orme ... by W. Bulmer & Co, 1823. Folio. (18 1/4 x 13 1/8 inches). 50pp. 25 plates (23 hand-coloured aquatints by M. Dubourg after Middleton, Philip Giuntotardi and others [3 double-page], 2 uncoloured engraved plates). Contemporary full straight-grain morocco, embellished in gilt and blind, spine in seven compartments with raised bands, lettered in gilt on a red morocco lettering piece. A very fine copy of this important colour-plate work written and illustrated by Middleton: "the first American classical archaeologist" (C.E.Norton), the son of Arthur Middleton (a signer of the Declaration of Independence) and the brother of Henry Middleton (a governor of South Carolina). John Izard Middleton, a younger son of Arthur Middleton (1742-1787), was born at Middleton Place, on the Ashley River just outside Charleston, South Carolina, in 1785. His father had signed the Declaration of Independence for South Carolina and had suffered under British hands during the Revolutionary War, but despite this his son finished his formal education at Cambridge University in England. Middleton spent a great deal of his adult life in France and Italy, and in addition to being an archeologist of note, was also a competent architect, and a fine topographical artist. He died in Paris in 1849, but his remains were brought back to Middleton Place for burial. The present work is important as one of the earliest published series of views of classical antiquities to be executed by an American, and offers a fascinating glimpse into the world of the "grand tour." The masterful aquatint engravings are remarkable for their beauty and precision in the depictions of ancient Greek and Roman ruins in Italy. Middleton is a pivotal figure in this world: his education, friends and social standing root him firmly in the tradition established by British 18th-century travelers to the Classical world, whilst his American nationality makes him a pioneer, a beacon for subsequent generations of his countrymen who were to follow in his footsteps in the 19th and early 20th centuries. Abbey Travel 165; Tooley 328. (Inventory #: 39369)
$19,500.00 add to cart or Buy Direct from
Donald A. Heald Rare Books
Share this item
Donald A. Heald Rare Books
Offered by