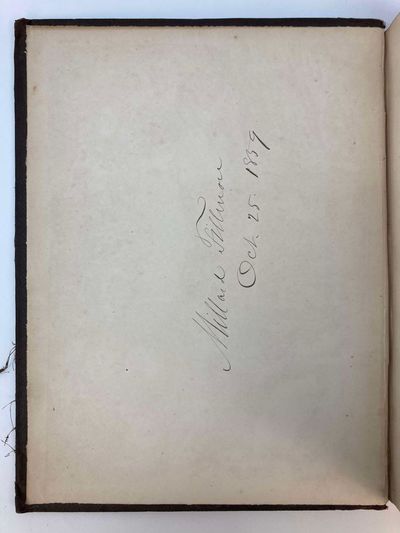 Book is shelf off the sales floor, in the upstairs office area Room B [Middle room]. Filmore (January 7, 1800 - March 8, 1874) was the 13th President of the United States (1850-53). Fillmore and his cabinet rode the first train from New York City to the shores of Lake Erie, and was a big proponent of a transcontinental railroad, urging Congress to authorize the federal funding for one.; This is the California/Oregon volume, with the report by Lieutenant Henry Abbot on the expedition, under the command of Lieutenant R.S. Williamson. They were attempting to find routes from the Sacramento Valley to the Columbia River. The first section described the routes and terrain, followed by sections on the geology, the botany, and the zoological report which included fishes, birds and mammals of the region. 1336121. FP New Rockville Stock. (Inventory #: 1336121)
$600.00 add to cart or Buy Direct from
Second Story Books
Share this item
Second Story Books
Offered by

The Hermetic and Alchemical Writings of Paracelsus (2 Volumes)

by Waite, Arthur Edward (edited with a biographical preface, elucidatory notes, a copious Hermetic vocabulary, and index by)

The Qabalah of Aleister Crowley (Including Gematria Liber 777 Sepher Sephiroth)

by Regardie, Israel (introduction by)

New York : Samuel Weiser, Inc , 1975
(click for more details about The Qabalah of Aleister Crowley (Including Gematria Liber 777 Sepher Sephiroth))
View all from this seller>