The Birth, Life, and Acts of King Arthur, of his noble knights of the round table, their marvellous enquests and adventures.. 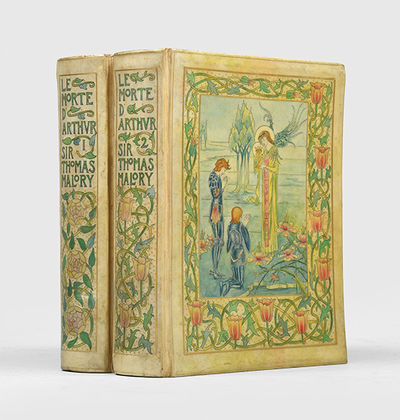 First Beardsley edition, one of 1,500 copies on ordinary paper; another 300 were printed on Dutch handmade paper. This copy in a stunning example of a "vellucent" binding, by Cedric Chivers of Bath, unsigned but a characteristic example of this style. Chivers's binding style is produced by hand-painting the backing sheet of the binding, which is subsequently covered in vellum that has been shaved to transparency, and then tooled in gilt. Chivers patented his vellucent method in 1898 and used it to create some of the most beautiful books of the turn of the century. In his bindery he employed "about forty women for folding, sewing, mending, and collating work, and in addition, five more women worked in a separate department, to design, illuminate, and colour the vellum", including Dorothy C. Smyth and Jessie M. King (Tidcombe, p. 86). This style influenced, and became closely associated with, the arts and crafts movement. In his catalogue of Books in Beautiful Bindings (c. 1905), Chivers describes the Beardsley Morte D'Arthur as "bound in whole vellucent from a design by the illustrator of the book. A figure panel enclosed in a floral border". The hand-painted cover illustrations for this set reproduce two of Beardsley's designs, Volume One depicting "How Four Queens Found Launcelot Sleeping" (p. 184) and Volume Two "The Achieving of the Sangreal" (frontispiece).

In 1892, seeking to emulate the books of the Kelmscott Press, John M. Dent commissioned the 20-year-old Beardsley to produce this edition, work that took the young artist 18 months to complete. "In Le Morte d'Arthur Beardsley learnt his job, but the result is no bungling student's work... If he had never illustrated another book, this edition of Morte d'Arthur could stand as a monument of decorative book illustration" (Lewis, pp. 148-9). The work was first published in twelve monthly magazine instalments between June 1893, and mid-1894. "Aubrey Beardsley's Morte Darthur was one of the most original and certainly one of the most controversial of the nineteenth-century artistic reinterpretations of Malory" which "established Beardsley as the voice of the 1890s" (Tepa Lupack, Chapter 4). "Often shockingly overt in their sexuality and eroticism, the illustrations rejected the aesthetic of the Pre-Raphaelites who were Beardsley's original mentors and offered a revisionist and parodic treatment of their medievalism. Ultimately, Beardsley went far beyond his original intention to 'flabbergast the bourgeois' of his day; he also challenged generations of readers and artists to view Arthurian society through his own modernist lens" (ibid.). La Morte Darthur was an immediate sensation upon publication.