Birds and Flowers, and Other Country Things (Association Copy) 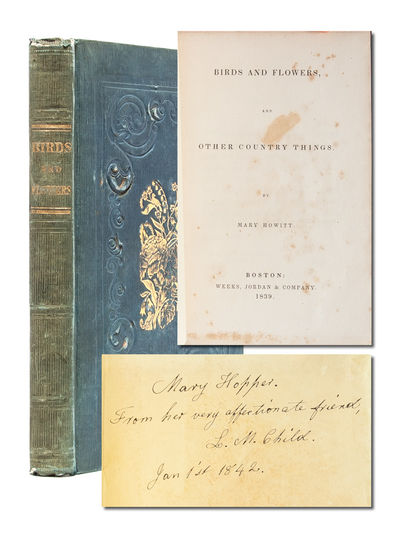 Mary Howitt's successful writing career brought her into circles that included Charles Dickens, Elizabeth Gaskell and the Brownings. Often her work interlaced observations on the natural world with poetry and illustration, as in the case of her famous work The Spider and the Fly as well as the present compilation. Notably, this copy was given by abolitionist Lydia Maria Child to a woman in her activist network -- reminding us today that friendship also bonded female leaders as did their political and social causes. Daughter of Isaac Hopper and a member of the well known Hopper family, the recipient Mary would have been a participant in efforts for prison reform and for abolition. Most importantly, however, she and her family took direct action in the aide of Black Americans facing systemic violence. In addition to providing sanctuaries and safe houses to those fleeing slavery, the Hoppers also worked against the kidnapping and enslavement of freepeople living in communities in the North. Only two years before giving this gift, Child released Isaac Hopper's biography, documenting his longstanding work for equality. Six years later, with the Seneca Falls Convention, Child and Hopper would push toward more intersectional activism, working for both abolition and women's rights. (Inventory #: 4032)
$1,250.00 add to cart or Buy Direct from
Whitmore Rare Books
Share this item

London : Sherwood, Neely, and Jones , 1809
(click for more details about William Tell; or Swisserland Delivered)
View all from this seller>