Memoirs of Celebrated Female Characters, who have Distinguished Themselves by their Talents and Virtues in Every Age and Nation...Embellished with Portraits 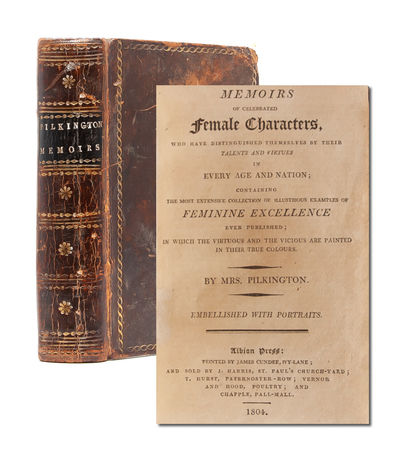 by Pilkington, Mrs. [Mary Susanna]
London: Albion Press, 1804. First edition. Contemporary calf with black morocco label to spine, and embossed in gilt. Front joint starting but firm; upper front corner rubbed. Early ownership signature of E. Griffith to front pastedown, else unmarked. Front and rear endpapers a bit loose but holding well. Measuring 102 x 92mm and collating [10], 346: complete, including all 12 engraved portraits inserted in the order called for by the instructions to the binder (though with Mrs. Cowley's used as a frontis rather than facing page 126). OCLC reports only 14 copies at U.S. institutions, with this being the only complete copy on the market.

A prolific author, Mary Pilkington drew on her firsthand experiences as an orphan and a governess to create her most important work. While the majority of her writing centered on fiction (she produced over 40 novels leading up to 1825), she was also deeply invested in the education of girls. Early works such as A Mirror for the Female Sex (1798) addressed the practicalities of education for parents and schoolmistresses as well as the girls themselves. This later work, pocket-sized and documenting the true-life contributions of hundreds of women, pushed even further. By providing the biographies of women -- royals, actresses, educators, activists, authors -- Pilkington provided historical role models for girls to look up to and be inspired by. "'Example moves where precept fails and sermons are less read than tales'...A Female Biography is an excellent subject, and likely to be perused by the youthful part of the community...I trust it will be an useful lesson," she writes in the Preface. These women had already broken ground, laying a foundation for future women's work. To that end, Pilkington makes a point not only of including women from antiquity, but contemporaries as well -- women such as Hannah More, Hester Piozzi, and Sarah Trimmer. (Inventory #: 4030)
$1,850.00 add to cart or Buy Direct from
Whitmore Rare Books
Share this item

Harry Potter and the Sorcerer's Stone

New York : Arthur A. Levine Books - Scholastic , 1998
(click for more details about Harry Potter and the Sorcerer's Stone)
View all from this seller>