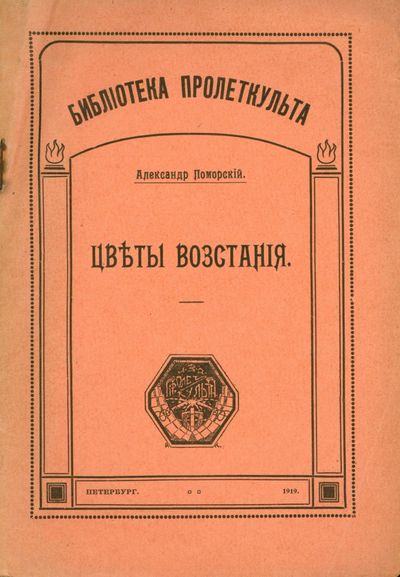 by Pomorskii, Aleksandr (born Linovskii)
St. Petersburg: Biblioteka proletkul'ta, 1919. Octavo (21 × 15 cm). Original staple-stitched printed wrappers on orange stock; 30, [2] pp. Unopened and uncut. Light rust to staples; wrapper edges slightly frayed, else very good. First edition. A collection of "worker poetry" by one of the "key organizers of the first Proletkult in 1917" the poet and playwright Aleksandr Pomorskii (1891-1977). Along with Vladimir Kirillov, Pomorskii started one of the most important local Proletkult organizations in Tombov where he lived until 1925, when the Proletkult movement began to decline. The Proletkult movement aimed to create a uniquely proletarian culture by encouraging and supporting artistic work by the members of the working class. Founded in 1917 at a congress of worker creative workshops Proletkult "began as a loose coalition of clubs, factory committees, worker's theaters, and educational societies devoted to the cultural needs of the working class." With support from the minister of education Anatoly Lunacharsky and theoretical guidance by Aleksandr Bogdanov, who believed that only art made by the proletariat can reflect most accurately the reality of the proletariat, "by 1918 it had expanded into a national movement with a much more ambitious purpose: to define a unique proletarian culture that would inform and inspire the new society" (See Lynn Mally. Culture of the Future: The Proletkult Movement in Revolutionary Russia, 1990; pp.100-101). This collection of poetry seems to have been especially popular with contemporaries and went through six editions. A catalog of St. Petersburg Proletkult appears on the rear wrapper of this publication.