The Capture of Old Vincennes The Original Narratives of George Rogers Clark and of His Opponent Gov. Henry Hamilton 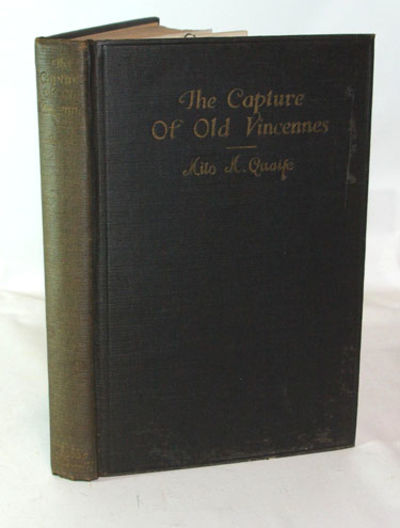 by Qauife, Milo M.
Indianapolis: The Bobbs-Merrill Company, (1927). Possibly a First Edition. Very good in black cloth covered boards with faint gilt text on the spine and gilt text stamping on the front board with blind embossed borders. An octavo of 8 5/8 by 5 3/4 inches with the cloth over the spine faded and the cloth worn through at the lower edges of both boards and the fore edge of the rear board. Signed by the author, Milo Milton Qauife on the first free end page with a date of April, 1928. Also, clipped to the first free end page is a two page letter from the Mississippi Valley Historical Review of September, 1928 which deals with the siege of Fort Sackville as well as a 1929 photograph of the "old British Jail" where Governor Hamilton and his British Officers were confined as prisoners of war 1n 1779-1780. 231 pages including an index and text. Illustrated with a frontispiece portrait of George Robers Clark from a painting. Bobbs-Merrill was very inconsistent in identifying their first editions for many years. They often used a "first edition" slug, but just as often made no mention at all. As this copy came from Mr. Qauife's library and he was its author it is probable that it is a first edition. (Inventory #: TB31711)
$75.00 add to cart Available from
Town's End Books
Share this item