How To Read Donald Duck; Imperialist Ideology in the Disney Comic 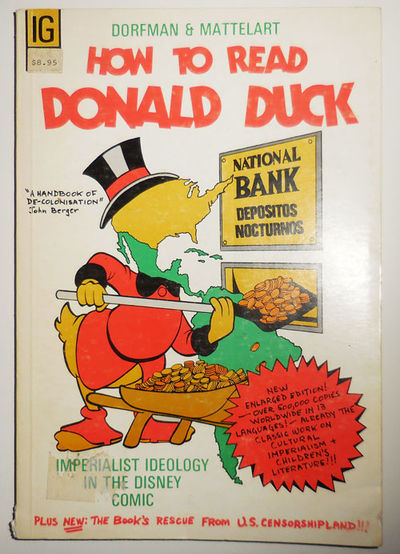 by Mass Culture; Disney - Dorfman, Ariel and Armand Mattelart
New York: International General, 1984. Second edition. Paperback. Good. Paperbound quarto. 119 pp. Illustrated. This is the stated first printing of the second enlarged edition. Translated by and with an introduction by David Kunzle. Originally published in Chile in 1970 and subsequently banned and burned there. A profound and imaginative critique of the sacred cow of children's culture: the Disney Myth. This copy in good condition with general light wear and sticker remains to the front panel. The binding is a bit fragile and should be handled carefully. (Inventory #: 30479)
$100.00 add to cart or Buy Direct from Derringer Books
Share this item
Derringer Books
Offered by

A Voyage To The Moon (Signed Broadside Poem)

No Place : Gehenna Press , 1969
(click for more details about A Voyage To The Moon (Signed Broadside Poem))