The DUBLIN PRACTICE Of MIDWIFERY 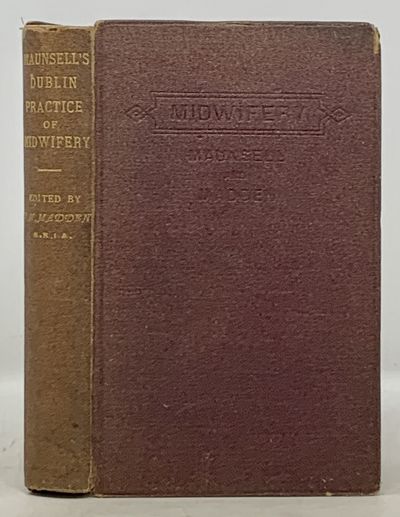 Maunsell "was educated at Dr Philips's school on St Stephen's Green, Dublin; Philips, like the Maunsell family, was a follower of the teachings of the radical clergyman John Walker (qv). Henry Maunsell became LRCSI (1827) and graduated MD at the University of Glasgow (1831). T hrough the spring and summer of 1831 he worked at the dispensary in Letterkenny, Co. Donegal. In the same year he was elected lecturer in midwifery at the Park St. medical school, and assistant accoucheur (male midwife) at the Wellesley Female Institution, Dublin. .... In February 1832 Maunsell became a fellow of the RCSI. In 1832 he was appointed assistant physician to the Magdalen asylum, Dublin. In February 1835 he became professor of midwifery at the RCSI. With Arthur Jacob (qv), he started (January 1839) the Dublin Medical Press, a weekly journal of medical science, and edited forty-two volumes from 1839 to 1859. He wrote The Dublin practice of midwifery (1834, 1856, 1871), a work illustrated with cases from the Wellesley Female Institution. Maunsell, in his first edition in 1834, was one of the earliest authors to discuss the use of stethoscopes to listen to the foetal heart; the instrument had been introduced into antenatal care and obstetrics in Dublin only the year before. He noted that the success of foetal monitoring using the new techniques depended on the experience of the midwife or doctor. He contributed a series of papers on obstetrics and children's health to the Dublin Journal of Medical and Chemical Science (1832–7). In 1841 the RCSI's School of Surgery established the first professorship of hygiene (or ‘political medicine’) in the UK, and Maunsell, having resigned his RCSI professorship of midwifery, was the first occupant of the chair until his resignation in 1846." [Dict of Irish Biography]. (Inventory #: 49178)
$115.00 add to cart or Buy Direct from Tavistock Books
Share this item

The INCREDIBLE CASE Of The STACK O'WHEATS MURDERS.; A Limited Edition Folio by Les Krims

[Buffalo, NY?] 1972
(click for more details about The INCREDIBLE CASE Of The STACK O'WHEATS MURDERS.; A Limited Edition Folio by Les Krims)

The ECCENTRIC And EXTRAORDINARY HISTORY Of NATH. BENTLEY, ESQ.; Together with an Accurate Description of his Singular Habitation, Usually Denominated the Dirty Warehouse in Leadenhall Street, with Many Curious and Original Anecdotes, Never Before Published; to Which is Prefixed the Strange and Eccentric Life and Adventures of Lord Rokeby, Whose General Propensity was Living in Water

London : Printed for Tegg & Castleman, at the Marvelous & Eccentric Book Warehouse, 122, St. John-Street, West Smithfield, and Sold by Ch , 1803
(click for more details about The ECCENTRIC And EXTRAORDINARY HISTORY Of NATH. BENTLEY, ESQ.; Together with an Accurate Description of his Singular Habitation, Usually Denominated the Dirty Warehouse in Leadenhall Street, with Many Curious and Original Anecdotes, Never Before Published; to Which is Prefixed the Strange and Eccentric Life and Adventures of Lord Rokeby, Whose General Propensity was Living in Water)
View all from this seller>