WIDE-EYED IN BABYLON: AN AUTOBIOGRAPHY 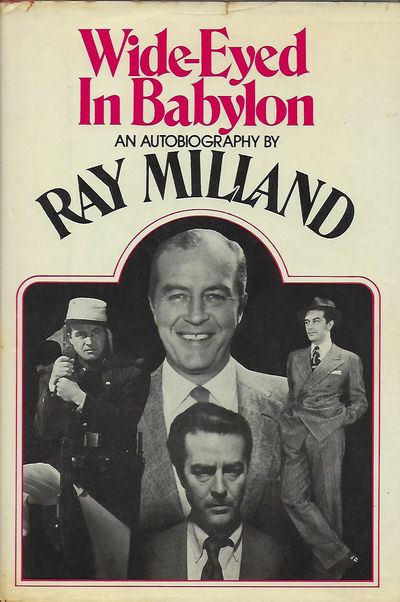 by MILLAND, Ray
NY: William Morrow & Company, Inc, 1974. First Edition, first printing. Signed by Milland on the half-title page. Milland [1907-1986] was a Welsh-American actor and film director. His screen career ran from 1929 to 1985, and he is best remembered for his Academy award-winning portrayal of an alcoholic writer in Billy Wilder's "The Lost Weekend" (1945) and also for such roles as a sophisticated leading man opposite John Wayne's 's corrupt character in "Reap The Wild Wind" (1942), the murder-plotting husband in Alfred Hitchcock's "Dial M For Murder" (1954), and Oliver Barrett III in "Love Story" (1970). Once Paramount Pictures' highest-paid actor, Milland co-starred alongside many of the most popular actresses of the time. Autographed copies of this book are uncommon!. 8vo., boards & cloth in dust jacket; 264 pages. Illustrated With Photographs. Very Good (covers nice; contents clean & tight); minor wear (few very tiny tears; little fade spine) d/j. (Inventory #: 57253)
$250.00 add to cart or Buy Direct from Antic Hay Books
Share this item
Antic Hay Books
Offered by