MINE THE HARVEST: A COLLECTION OF NEW POEMS 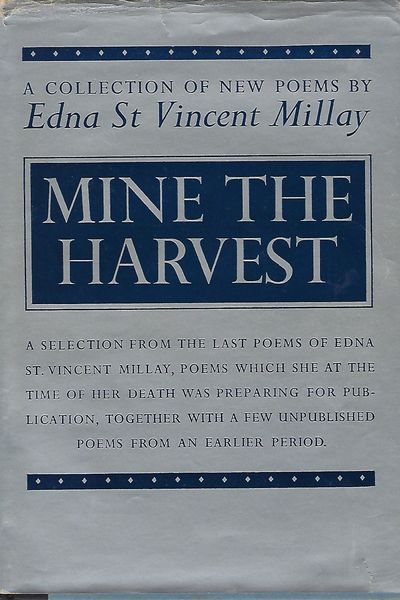 by MILLAY, Edna St. Vincent
NY: Harper & Brothers Publisher, 1954. First Edition (so stated). With the personal bookplate of American poet William Vincent Sieller on the front pastedown, followed by "And from the living room at Steepletop- August 19, 1956. Norma Millay." Norma Millay Ellis [1894-1986] was an American singer and actress, and sister of Edna St. Vincent Millay. She married painter and actor Charles Ellis and appeared with the Provincetown Players and in Broadway productions. At the time of her sister Edna St. Vincent Millay's death in 1950, Ellis was left as the sole heir to her estate, leaving her to inherit Steepletop, a 650-acre farm in Austerlitz, New York, where Millay had spent the last twenty-five years of her life, as well as rights to all of her creative and intellectual property. In 1973, Ellis would go on to create the Millay Colony for the Arts, right next to Steepletop, as a center for burgeoning artists, offering residency and workshops for them to refine their craft. She is responsible for the publication of this posthumous book- the last collection of Millay's poetry prepared just before she died. Probably one of the nicest association copies of this title you will find!. 8vo., cloth & boards in dust jacket; 140 pages. Very Good (covers nice & bright; contents clean & tight with little occasional light browning endpapers); bit of edgewear (few tiny chips head of spine & few short tears) d/j. (Inventory #: 57256)
$175.00 add to cart or Buy Direct from Antic Hay Books
Share this item
Antic Hay Books
Offered by