Law of Patronage and Settlement of Parochial Ministers 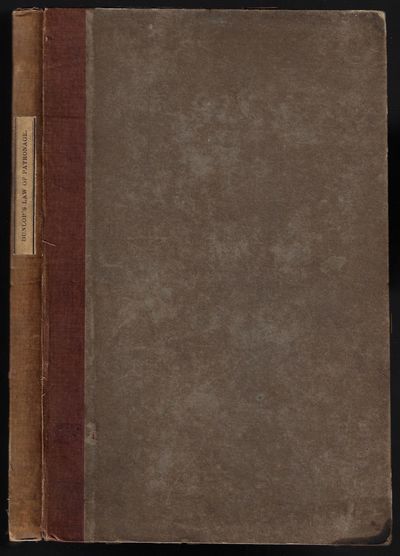 by Dunlop, Alexander
Edinburgh and London: William Blackwood and T. Cadell, 1833. First Edition. Hardcover. Good+. 8vo, 138 pp + vi (publisher's ads). Bound in what is likely the original binding of paper-covered boards with cloth spine and paper spine label. Cloth partially split along rear joint, mild spine slant, evidence of removal of bookplates on pastedowns. Occasional foxing, but overall quite clean. A supplement to Dunlop's earlier work, Parochial Law. According to the Oxford Dictionary of National Biography, Dunlop "was a firm supporter of [the party] later known as the non-intrusionists, which wished to limit the power of patrons to appoint ministers to Church of Scotland parishes. In 1830 Dunlop was elected to the general assembly of the Church of Scotland....Dunlop thus arrived on the national stage just as the evangelical party was moving to a position of dominance in the church. He became an active member of various church societies, including the Church Law Society and the Anti-Patronage Society, and by 1834 he was editor of the Presbyterian Review, the journal of the evangelicals and non-intrusionists....[He] was to play a leading role in most of the controversies in the 'ten years' conflict' which resulted in the Disruption of the Church of Scotland in 1843. He acted as counsel for the non-intrusionists and the presbytery of Auchterarder in what became a test case (heard in 1838 and 1839) on the legality of the Veto Act. By this measure the non-intrusionists had sought to restrict the power of patrons to present nominees to vacant parishes by making it conditional on a measure of popular assent. (Inventory #: 21417)
$200.00 add to cart or Buy Direct from Walkabout Books
Share this item

The Fringe of the East, a Journey through Past and Present Provinces of Turkey

London : Macmillan , 1913
(click for more details about The Fringe of the East, a Journey through Past and Present Provinces of Turkey)
View all from this seller>