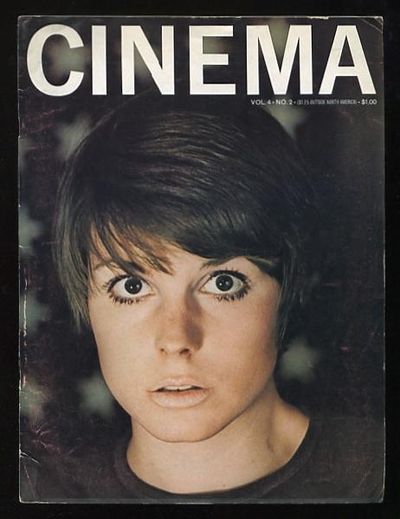 by {Baldwin, James} (Nagata, Grace, ed.)
Beverly Hills CA: Spectator International. Very Good+. 1968. (Vol. 4, No. 2). Magazine. [modest edgewear to covers, slightly bumped at top right corner] (B&W photographs) Contents include: an interview, entitled "I Can't blow this gig," with author James Baldwin, who was then engaged in trying to write the screenplay for a biopic of Malcolm X (whether Baldwin blew it or not, the gig was abandoned--or rather, deferred, as when MALCOLM X finally did make it to the screen in 1992, its producer was Marvin Worth, the same producer that Baldwin was working with in 1968); an interview with executive Kenneth Hyman, then head of Warner Bros.-Seven Arts (who, when referencing various young filmmakers he's got his eye on, mentions the name of George Lucas, then 24 and with only a handful of short films to his credit); a pictorial feature on actress Susan St. James; an interview with legendary press-agent Russell Birdwell; the scenario of Charlie Chaplin's THE GOLD RUSH ("compiled from the film," it sez, "since no shooting script ever actually existed"); a brief "Tribute to Carl Th. Dreyer (1889-1968)," including a filmography; an interview with director Karel Reisz; lengthy reviews of THE CHARGE OF THE LIGHT BRIGADE (Tony Richardson), LA CHINOISE (Jean-Luc Godard), and 2001: A SPACE ODYSSEY (Stanley Kubrick). Also worth mentioning is the terrific full-page black-and-white photo of Baldwin (by Stan Tropp), on the page facing his interview. [We have numerous issues of this and other film-related periodicals that are not listed online; please inquire if you have particular needs or wants.] . (Inventory #: 26296)
$40.00 add to cart Available from ReadInk
Share this item
ReadInk
Offered by

Do I Hear a Waltz?