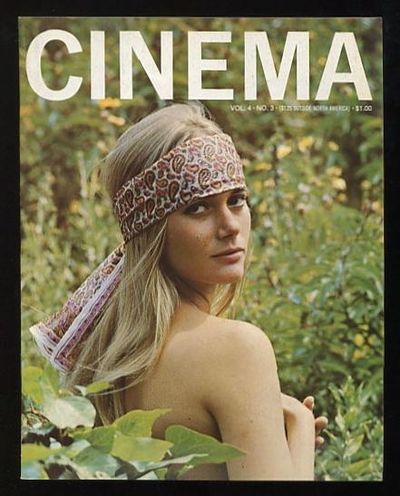 by (Nagata, Grace, ed.)
Beverly Hills CA: Spectator International. Near Fine. 1968. (Vol. 4, No. 3). Magazine. [nice copy, very light handling wear, virtually as-new]. (B&W photographs) Contents include: a lengthy "chronicle of the events that led up to the collapse of this year's Cannes Festival" (undoubtedly the most tumultuous in the festival's history, caught up as it was in the political crisis that gripped France in May of 1968); an interview with filmmaker Frank Simon, about his documentary film THE QUEEN, about the "All American Beauty Pageant," held in New York in February 1967 to select "America's most beautiful female impersonator"; an examination of the films of writer-director Robert Rossen, with a filmography; brief writeups on various films then in production (including THE LION IN WINTER, CANDY and MIDNIGHT COWBOY); an interview with graphic designer Saul Bass, focusing on his innovative film title work; an article about the then-current TV series THE MOD SQUAD (thus accounting for the cover photo), quoting from an interview with its producer, Aaron Spelling; lengthy reviews of HOUR OF THE WOLF (Ingmar Bergman), ROSEMARY'S BABY (Roman Polanski), LES CARABINIERS (Jean-Luc Godard), FINIAN'S RAINBOW (Francis Ford Coppola) and other films. (The Polanski and Godard films are reviewed by Harlan Ellison!) [It's worth noting that for this one issue only, the magazine "shrunk" from its former (and subsequent) 9x12 size, to an 8-1/2 x 11 format.] [We have numerous issues of this and other film-related periodicals that are not listed online; please inquire if you have particular needs or wants.] . (Inventory #: 26298)
$40.00 add to cart Available from ReadInk
Share this item
ReadInk
Offered by